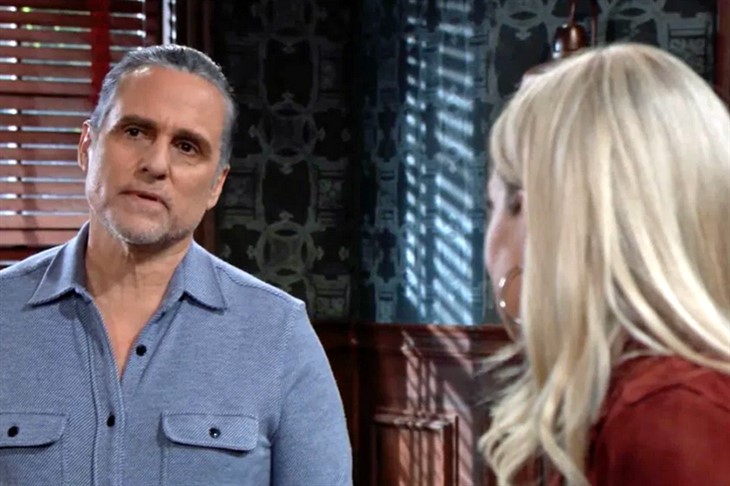 General Hospital (GH) spoilers for Friday, September 24, 2021, reveal in Port Charles, NY Sonny Corinthos coming face to face with Nina Reeves at his own grave. Will he be as angry as ever? Will she be as delusional as ever?

General Hospital Spoilers – Sonny Corinthos Has A Bone To Pick

Why Sonny (Maurice Benard) and Nina (Cynthia Watros) both decided to visit a very-much-alive Sonny’s grave at the exact same time is beyond us but maybe he is really visiting Morgan and she is visiting Nelle. Either way, they run into one another and Nina thinks if she just smiles, laughs nervously, and explains herself, then sure the Smike side of Sonny will forgive her. But as she told Maxie, she really doesn’t know Sonny Corinthos at all.

You see, he’s not a very forgiving fella, and Ava Jerome (Maura West) can tell you a story or two, Nina. (So can Brenda Barrett. Ask her about that time she wore a wire.) Sonny might have forgotten his entire life for the last nine months, but now that he remembers, he will never forget what Nina did to him.

As for Carly (Laura Wright), she and Jason Morgan (Steve Burton) are at a crossroads now that they took those vows and admitted they’d been in love for decades. Carly wonders what they are going to do now but as usual, Jason really doesn’t have any answers when it comes to all this emotional stuff.

GH Spoilers = The Case Of The Missing Liesl Obrecht

Now that Britt Westbourne (Kelly Thiebaud) knows that her mother was really after Peter August (Wes Ramsey) when she disappeared, she’s more panicked than ever. She gets even more alarming news on Friday just as Liesl (Kathleen Gati) starts threatening Victor Cassadine (Charles Shaughnessy)

At least Maxie Jones (Kirsten Storms) decides to give Scotty Baldwin (Kin Shriner) some news about his “Liebchen” and he goes into a panic right along with Britt. This isn’t going to help poor Liesl at all. It’s a good thing she’s pretty adept at helping herself.

As Spencer (Nicholas Chavez) and Nikolas Cassadine (Marcus Coloma) play chess and grow closer, Spencer is beginning to realize he made a big mistake when he brought Esme into his life and decided to stalk Ava Jerome (Maura West). However, there is no turning back now.

Little do they know that Trina Robinson (Sydney Mikayla) and Cam Webber (Will Lipton) are onto him and intend to make the truth come out. Stay tuned to General Hospital weekdays to see how these stories play out.