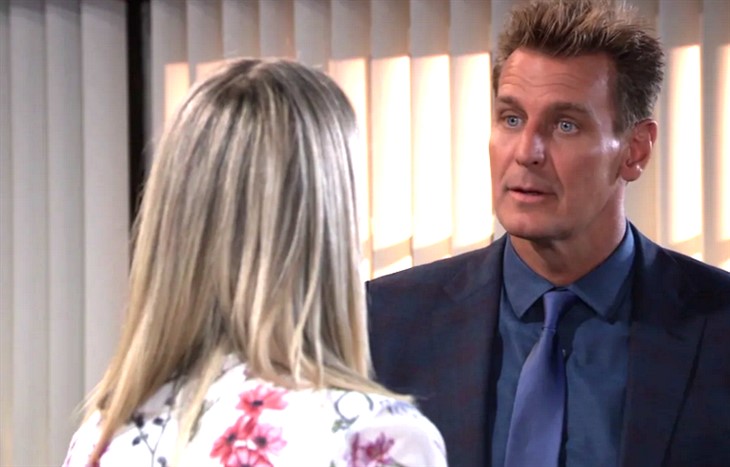 General Hospital (GH) spoilers for Friday, September 10, 2021, reveal Jax stunned over Nina’s deception and not knowing what to do.

Jasper Jacks (Ingo Rademacher) stood there in disbelief as he listened to Nina’s (Cynthia Watros) delusional tale of loving a man named Mike who they both know is Sonny Corinthos (Maurice Benard). And he stands there in more disbelief on Friday when Nina tries to use reason to get Jax not to tell Smike that he’s really Sonny. Does she tell him she needs to be the one to break it to him gently? Will Jax fall for that nonsense and drag this out another week until September 17 when Jarly is supposed to marry?

Will Nina even be able to bring herself to tell Sonny the truth? She’s convinced himself he’s better off not knowing who he is and we’re not sure if Jax can change her mind.

GH Spoilers – Trouble With The Wedding

Jason (Steve Burton) is now looking forward to a real wedding and marriage with Carly (Laura Wright), but there’s trouble on the way in the form of Cyrus Renault (Jeff Kober). He knows Cyrus is somehow causing trouble from jail but he has to prove it. He also has to allow this wedding to happen, for the business’ sake and his own. This is going to turn out to be one heck of a wedding — in more ways than one.

TJ (Tahj Bellow) can’t believe it when Curtis (Donnell Turner) rushes Jordan (Briana Nicole Henry) into GH and she has to be put on a respirator immediately. Curtis can tell things don’t look good for her, while Portia (Brook Kerr) is an absolute wreck and refuses to take care of herself as she worries about Jordan. Will she be down for the count next?

Brook Lynn (Amanda Setton) may be taking care of Maxie’s (Kirsten Storms) baby in a grand scheme to fool Peter (Wes Ramsey) and Valentin (James Patrick Stuart), but that doesn’t stop them from arguing as two frenemies should. This time, Maxie accuses Brook Lynn of thinking she is a bad mother. What will Brook have to say about that? Stay tuned to General Hospital weekdays to see how these stories play out.