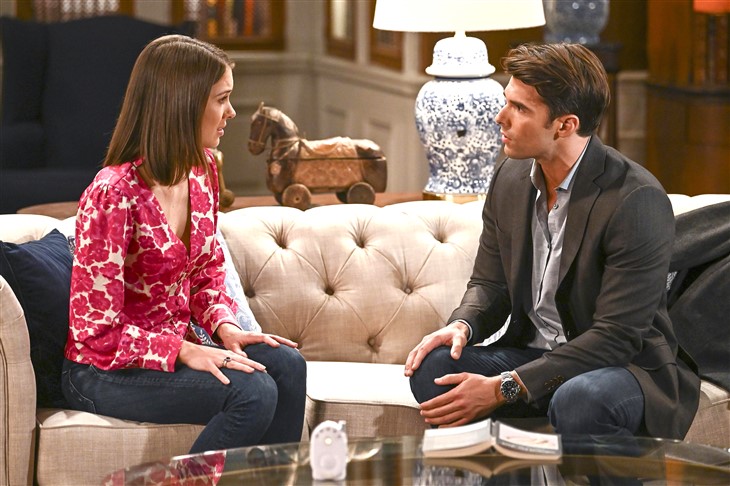 General Hospital (GH) spoilers reveal that in Port Charles, NY Harrison Chase (Josh Swickard) can walk again. However, he has been keeping this a secret. He wants to surprise Willow Tait (Katelyn MacMullen) by walking up to her. He puts his plan into action but Chase is the one that ends up being surprised. He catches Willow and Michael Corinthos (Chad Duell) together.

GH spoilers reveal that during the week of August 2, everyone will be celebrating Wiley Quartermaine-Corinthos’ (Erik and Theo Olson) third birthday. However, it is also the death anniversary of Willow’s baby. She is also struggling with keeping her feelings for Michael under wraps while in a fraudulent marriage with Chase. If that were not enough, Harmony Miller (Inga Cadranel) shows up uninvited and unannounced.

So, Willow is overwhelmed by everything that she is having to face. However, things will only get messier and more complicated.

Jason Morgan (Steve Burton) and Carly Corinthos (Laura Wright) interrupted Willow and Michael’s kiss. Even though they weren’t seen as they pulled apart before Jason and Carly walked in, it was clear a moment was interrupted. Carly talked to Willow about it privately and told her if she can see their feelings, then so will others. Then, she advised Willow to tell the truth. She explained that lying to Chase might seem like the kind thing to do, but it would cause more pain in the end.

General Hospital spoilers reveal that Willow isn’t the only one with a secret. Chase has been keeping something hidden, too. He is starting to be able to walk again but he doesn’t want Willow to know yet. When Austin Gatlin-Holt (Roger Howarth) asked why, Chase explained that he wants to see Willow’s face as he is walking toward her. He thinks that it will be a romantic surprise. Austin agreed to not say anything but did urge Chase to be honest with his wife.

Later, Chase decides to walk up to the gatehouse where Willow is and surprise her with him being out of the wheelchair. However, Willow and Michael are giving into temptation. Chase’s recovery surprise and Willow’s secret romance will collide, co-head writer Chris Van Etten told Soap Opera Digest.

Even though this love triangle involves three people — Chase, Willow and Michael — there could be many more who are impacted. It’s only because Micahel and Willow kept delaying telling Chase the truth. First, they decided to wait until he felt better, then when was getting out of the hospital. It kept snowballing and getting postponed for a “better time.”

Now so much time has passed and it has gotten more complicated. Willow married Chase on his deathbed, then the officer flatlined and was resuscitated. Michael and Willow postponed telling the truth once again by waiting until he can walk.

In addition to that, more people have found out the truth. So, not only will Chase feel deceived by Willow and Michael, but he will be furious with his loved ones that knew and never said anything.

There is also another factor to consider and that’s how Chase handles the deception. He could put all of his anger to use in fully recovering or he could spiral and end up making some dangerous choices. Depending on what he does to cope, it could lead to devastating and even fatal consequences. He could snap and end up taking someone’s life. He might turn to drinking and get into an accident. Or he could plummet into a deep depression. There are a lot of different routes for this storyline to take. No matter what happens, Michael and Willow will be responsible for not being honest from the beginning.