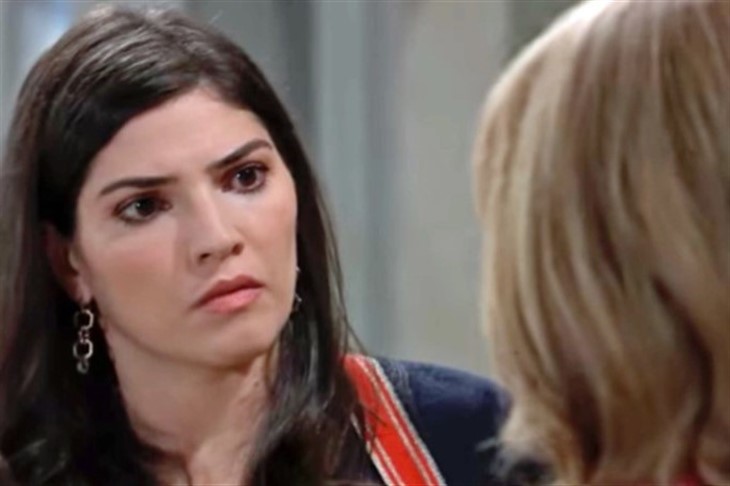 General Hospital (GH) Spoilers tease that Brook Lynn Quartermaine (Amanda Setton) has returned to Port Charles with big plans! She still feels awful about being tricked by Valentin Cassadine (James Patrick Stuart) into giving him her ELQ shares which allowed Valentin to take over ELQ. But she also had a brief fling with Valentin, which apparently left her pregnant. But is everything the way it seems?

Although Brook Lynn seems to be quite far along in her pregnancy, she got really defensive when Britt Westbourne (Kelly Thiebaud) offered to be her doctor. She also didn’t want to go to a Lamaze class with her frenemy Maxie Jones (Kirsten Storm).

While it’s possible that Brook Lynn is just being Brook Lynn, could there be another reason she doesn’t want anyone getting too close. Perhaps she isn’t really pregnant at all! As General Hospital viewers know, when Brook Lynn left town a few months ago, she had a pregnancy test with her. What if it turned out negative, but gave her an idea?

What if Brook Lynn decided to fake a pregnancy in order to trick Valentin the way he tricked her? When Valentin took over ELQ, General Hospital spoilers show Brook Lynn blamed herself. So if she is faking her pregnancy her end goal is likely to get those shares back in the Quartermaine family.

But how will Brook Lynn explain it when there is no baby? That’s where her old friend Lucas Jones (Matt Trudeau) may come in. Recently, Lucas volunteered to be her Lamaze partner and Brook Lynn indicated that she might need Lucas’ help!

But Lucas might not be willing to help out with such a deception. Not only could it put his career at risk, he just went through a major ordeal. The baby and Brad Cooper (Perry Shen) adopted died the night he came home, but Lucas didn’t find out the truth for months that Brad switched the baby with Nelle Benson’s (Chloe Lanier).

According to GH recaps, Lucas suffered quite a bit because of that deception, and returned the baby to his rightful father, Michael Corinthos (Chad Duell). Lucas will likely not be willing deceive anyone in the way he was deceived, even Valentin. So Brook Lynn may need to look elsewhere for help with her plan!

General Hospital Spoilers – What Will Happen Next?

What do you think? Is Brook Lynn really pregnant? Or is this just a scheme to get her ELQ shares back? Will Lucas help Brook Lynn or turn her away given what happened with Wiley Corinthos (Erik & Theo Olsen)? Crazy schemes are par for the course in Port Charles, so stay tuned to General Hospital airing weekdays on ABC. And don’t forget to check Soap Opera Spy regularly for all your General Hospital news, information and spoilers!