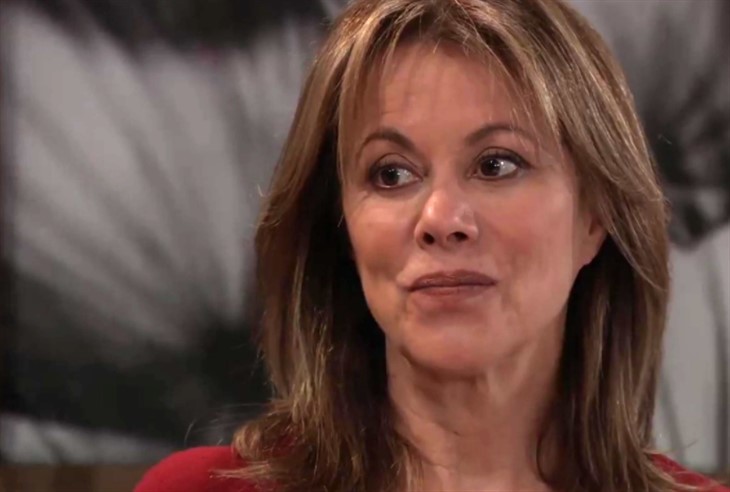 General Hospital (GH) spoilers say that while Alexis Davis (Nancy Lee Grahn) is a very strong and confidant woman, both inside and out, she’s about to face the music and she knows that her fate is in the hands of the court, especially if she is sentenced for her attack on Date Falconeri (Dom Zamprogna). Read on for all of the latest spoilers.

The latest issue of Soap Opera Digest says that tensions are certainly running high for Alexis and her family, as the disgraced attorney is facing charges for the attempted murder of Dante. She arrives for sentencing know that her life may soon change as she knows it.

According to General Hospital co-head writer Chris Van Etten, Alexis knows that if she were to fight the charges, she might walk away with a lighter sentence. But will she be that lucky?

Etten offers, “ She might be able to plea bargain to a sentence that doesn’t mean somebody throwing the book at her. But in so doing, it would be denying her responsibility for the crime, it would be her weighing her health, her mental health, her sobriety, and her sense of self at the top of her priorities here, and in order to do that, she feels she has to accept responsibility for what she did, rather than try to deflect and get a lighter sentence.”

GH Spoilers – What’s Next For Alexis Davis – Is She Guilty?

General Hospital spoilers say that Alexis is certainly scared about what she’s entering into. Of course, her decision could result in a lengthy stay at Pentonville, which she doesn’t take lightly, nor do the people around her. Before the court is called into session, Sam McCall (Kelly Monaco) makes a valiant effort to persuade her to plead not guilty. But is that something she’s willing to do? Fans will find out soon enough!

Of course, General Hospital fans will be at the edge of their seats for all of the action this season. GH airs weekdays on the ABC network. You’ll have to check your local listings for times. Be sure to catch up on everything happening with General Hospital right now. Come back here often for all the latest General Hospital spoilers, news, and updates.