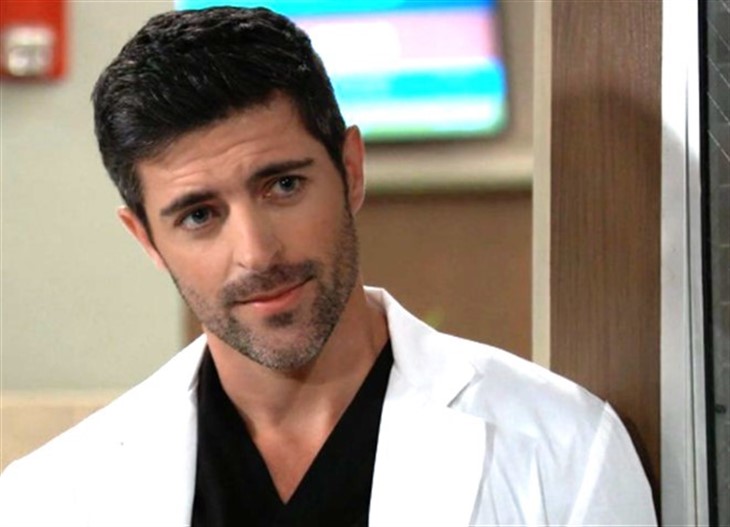 General Hospital (GH) spoilers and updates reveal Dr. Lucas Jones (Matt Trudeau) is single. He was married to Brad Cooper (Parry Shen). They had been looking forward to a life together. Brad and Lucas had decided that they wanted to be parents. They knew that they would need to adopt a child. After going through the process of adopting a child the day came when their son was born. Brad was the one who got to take their son home. However the boy died. Brad was devastated. He tried to take the boy to the hospital but did not get there.

He ended up on the side of the road where he encountered Nelle Benson (Chloe Lanier) who had just given birth to her son. Nelle did not want her son to be with his father Michael Corinthos (Chad Duell) and his grandmother Carly Corinthos (Laura Wright). Nelle gave her son to Brad and took the boy that had died with her. Brad was filled with guilt but wanted to have a happy home with Lucas and their son who they named Wiley Cooper-Jones (Theodore and Eric Olson). However Lucas found out that Brad had switched the boy that they lost with Michael’s son. Lucas was heartbroken but returned Wiley to Michael. Lucas decided to leave Brad.

Lucas has wanted to start to date again. He has been getting close to Felix DuBois (Marc Samuel) who is a nurse at General Hospital. Lucas and Felix have a past as friends. They did try to date at one point but they decided to remain friends. Lucas and Felix have been going on a few dates. Lucas seems to be ready to be in a relationship with Felix. Felix is a good man who has helped many with different problems. Recently he helped Mike Corbin (Max Gail) with his Alzheimer’s disease before he passed away. Could Felix be the man that brings love back into Lucas’ life?

General Hospital Spoilers: Can Finn And Diane Save Alexis?https://t.co/qmnz27njNU

Lucas still feels connected to Brad. Recently Brad was injured. Brad has been serving time in Pentonville Penitentiary for kidnapping Wiley. Brad was brought to General Hospital and taken care of by his friend Dr.Britt Westbourne (Kelly Thiebaud). Britt got Lucas to go see Brad. Lucas was upset that Brad had been hurt. Later Britt got Brad out of Pentonville for a checkup on Valentin’s day. Brad saw Lucas and Felix going on their date. Brad wants another chance with Lucas. Could Lucas find a way to forgive Brad and start over with him?
General Hospital Spoilers: Lucas Wants to Be Happy Again

General Hospital Lucas is ready to be in a relationship again. He wants to be in a good relationship. Lucas can trust that Felix would be good to him. Can Felix help Lucas get over Brad? However Lucas still cares about Brad. Could Brad get out of Pentonville and win Lucas back?

Tune into General Hospital to find out if Lucas moves on with Felix or goes back to Brad.