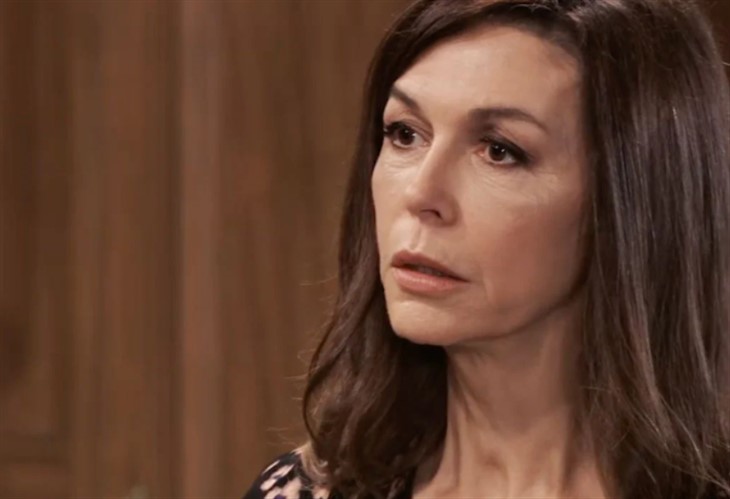 General Hospital (GH) spoilers for Wednesday, April 14, 2021, reveal Anna in shock, Willow frantic, Nina on the spot, and Brook Lynn putting on a better act than ever before.

General Hospital Spoilers – Harrison Chase Down For The Count?

A light went off in Anna’s (Finola Hughes) secret agent head when Finn (Michael Easton) mentioned that Chase (Joshua Swickard) seems to have strange food poisoning. Did Peter (Wes Ramsey) try to hurt Finn and get to Chase instead?

That seems logical so Anna heads straight to her basement where her sociopath nephew taunts her some more. He DID hurt someone she knows, but he hurt the wrong someone. After all, he is Peter.

Meanwhile, Willow is terrified when Chase passes out right in front of her. She knows it’s bad and rushes him to General Hospital where she waits for a prognosis.

Finn does the best he can to treat Chase, but maybe he isn’t the best person for this job. Jackie (Kim Delaney) is also at GH worried about her son as she and Finn whisper to each other about all their unfinished business.

Brook Lynn (Amanda Setton) continues to keep up her baby charade when she runs into Dante (Dominic Zamprogna). He asks her if she knows what she’s doing and she assures him she has everything under control. But claiming you’re having Valentin Cassadine’s (James Patrick Stuart) baby when you’re not on General Hospital is a little more difficult than Brook ever believed.

Sonny (Maurice Benard) certainly enjoys spending time with Nina (Cynthia Watros) in Pennsylvania but he wants to know more about her. He still can’t shake the feeling that she is the blonde woman of his dreams, although the world is made up of so many blonde women. He even finds time to flirt with her on Wednesday.

As Sonny fishes for more answers from Nina, she gets a phone call from Jax (Ingo Rademacher). He’s just checking in and wants to know how she is. With Nina speaking with someone from Port Charles, will the guilt get to her enough to spill about Sonny?

General Hospital spoilers show Nina didn’t intend to keep his living status a secret, but Carly sure provoked her. It’s only a matter of time before she caves, right?