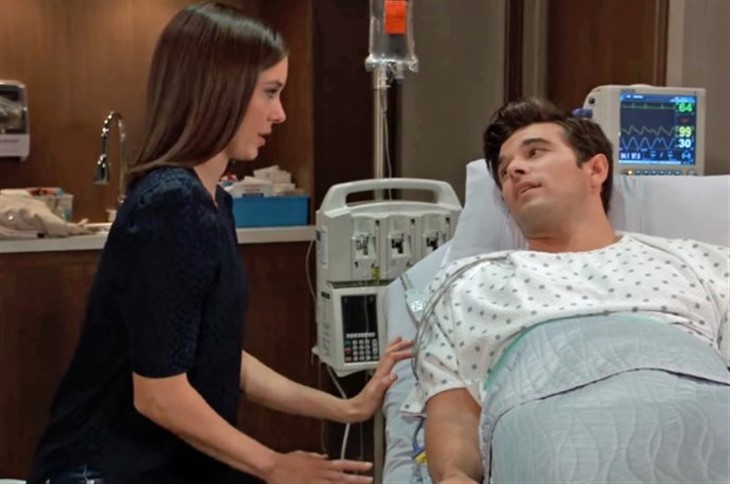 General Hospital (GH) spoilers for Tuesday, April 27, 2021, reveal Willow in fear as it looks like Chase may not make it as Anna confronts Peter and makes demands.

General Hospital Spoilers Tomorrow – The Race To Save Harrison Chase

Willow (Katelyn MacMullen) has barely left Chase’s (Josh Swickard) side since she brought him into the hospital with odd symptoms. She became especially alarmed when Chase became delusional and thought the two of them were married. Little does he know she wants to remarry Michael (Chad Duell) but has been afraid to tell him while he’s sick.

On Tuesday’s General Hospital, Willow is frantic as Chase seems to be losing his grip on life. Her ex looks down for the count but an optimist like Willow can only hope for the best when everything seems to be at its worst.

Meanwhile, GH spoilers say Anna (Finola Hughes) gets some alone time with Peter (Wes Ramsey) at Maxie’s (Kirsten Storms) place and she’s just about had it with him. She demands he give her the antidote now that she got Maxie to agree to see him. But Peter wants more because he always wants more. He is not about to save Chase’s life just yet.

This means Anna needs even more from Maxie and begs her to do the wrong thing for her but the right thing for Chase. Will Maxie be willing to put herself and her baby in any more danger?

Speaking of Maxie’s baby, Brook Lynn (Amanda Setton) thinks she hit paydirt after learning Maxie plans to pretend her baby is dead. Olivia (Lisa LoCicero) tells Brook not to breathe a word of what she said to anyone, but Brook Lynn keeps asking about what her stepmother overheard.

Olivia gets a little suspicious by Brook Lynn’s sudden interest in Maxie and her baby. Will she figure out what Brook is really up to on General Hospital?

Over in Nixon Falls, General Hospital spoilers tease Nina (Cynthia Watros) continues trying to make sure a now-lucid Jax (Ingo Rademacher) does not see Sonny (Maurice Benard). After all, it’s easy to tell Jax he was just delirious when he thought he saw Sonny earlier.

Now, Sonny is at the clinic and Nina needs to find a way to make him go away. Sonny can tell Nina doesn’t want him there and flat out asks her why. Will Nina finally fess up? Stay tuned to General Hospital weekdays to find out how these stories play out.

The Bold And The Beautiful (B&B) Spoilers Update Tuesday, April 27: Hope Takes Liam Back, Eric Pours Out His Feelings