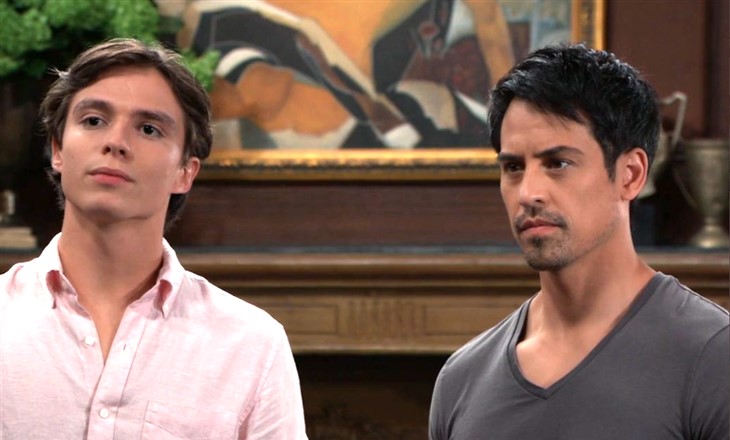 General Hospital (GH) spoilers tease that Nikolas Cassadine (Marcus Coloma) is a man on a mission. Nikolas currently has several issues that he needs to resolve. First, there’s the matter of getting Shawn Butler (Sean Blakemore) to stop looking into who shot Hayden Barnes (Rebecca Budig). Shawn went to prison and served a long term in prison for the crime, but Nikolas is actually the one who hired the hitman who committed the deed. But right now, Shawn is more focused on even locating the elusive Hayden that finding out who shot her. No Nikolas might be in the clear, at least for now.

General Hospital Spoilers – Nikolas Cassadine Wants To Save His Marriage To Ava Jerome!

But that’s not the only thing on Nikolas’ mind at the moment. For months now, he and his wife Ava Jerome (Maura West) have been receiving “gifts” from someone who obviously doesn’t want them to stay married. It seemed as if the mysterious stalker was connected to Ryan Chamberlain (Jon Lindstrom) but Ryan is unable to move after he was stabbed in Pentonville. Then talk switched to the culprit being a crazed fan of Ryan. And now, Nikolas has discovered that Ryan had corresponded with his son Spencer Cassadine (Nicholas Chavez) at least once. After reading the supposedly unread letter, Nikolas began to wonder if his own son was the Stalker!

As it turns out, Nikolas was right to suspect his son. Spencer was indeed the Stalker who is responsible for scaring Ava into leaving Nikolas for their own safety. But Nikolas doesn’t have any proof. Spencer is planning a huge party at Wyndemere. Nikolas has let Spencer believe he’s heading to Dubai, but in reality he’s planning a trap to expose Spencer. It remains to be seen just how successful Nikolas is in this endeavor! This is Spencer’s first chance to impress Trina Robinson (Sydney Mikayla) but that relationship will end as quickly as it began if Trina finds out that Spencer is the one responsible for her being covered in a blood like substance on what should have been her big moment as she entered her own graduation party.

Will the party of Wyndemere go without a hitch? Or will Nikolas expose his son in front of his family and friends? And just how much does Ryan have control over Spencer if at all? Anything can happen in Port Charles, so stay tuned to General Hospital airing weekdays on ABC. And don’t forget to check back right here regularly for all your General Hospital news, information and spoilers!

B&B Spoilers: Steffy Has Some Serious Demands – Ridge Ticked Off