B&B Spoilers: Steffy Has Some Serious Demands – Ridge Ticked Off 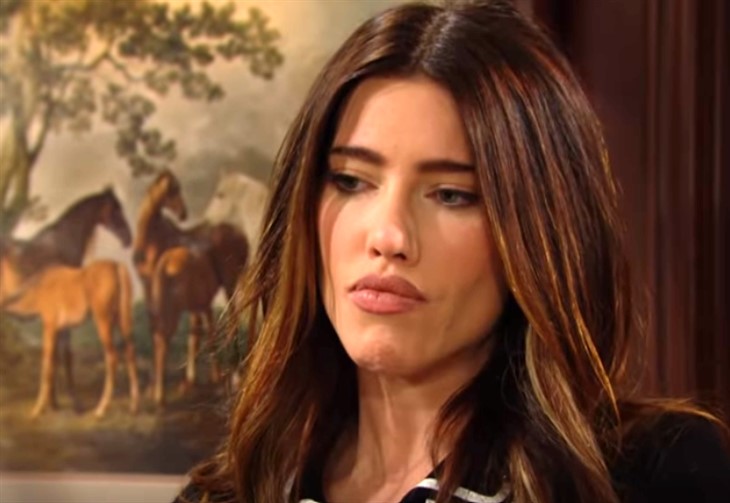 The Bold and the Beautiful (B&B) spoilers for Thursday, August 12, 2021, reveal Steffy having some rules for her marriage that Finn better adhere to or he’s in some big trouble.

Finn (Tanner Novlan) was so happy to finally meet his birth mother. He’s wondered about her his entire life and finally has her standing in front of him only to learn she is basically nuts and did some horrific things. Right there in that living room where he just married Steffy (Jacqueline MacInnes Wood), he got to hear all about the night Sheila Carter (Kimberlin Brown) shot both Taylor Hayes (Hunter Tylo) and Brooke (Katherine Kelly Lang). This was some heavy stuff Finn never dreamed of, but what happens next he also never expected.

Steffy is just reeling from the fact that her son has this woman’s blood coursing through his veins, but she will never ever be a part of that baby’s life — whether Finn likes it or not. And if Finn wants to stay married to Steffy and in his own son’s life, he better make sure he never has contact with Sheila because Steffy just won’t stand for it. Finn better not test her because she means business. What a way to start a marriage.

While Steffy has her new husband aside laying down the law about his newfound mother, Ridge (Thorsten Kaye) is also making some demands and they are of Sheila. He wants this woman to go away and stay out of all of their lives. So, he essentially sounds just like Steffy and probably just like Brooke and Eric (John McCook). If Taylor somehow made it to her daughter’s wedding, she’d be saying the exact same thing.

Will Sheila even listen? A sane person would have known showing up at the Forrester mansion on Steffy and Finn’s wedding day wasn’t the best idea, but nobody has ever called Sheila sane. How much trouble will she really cause for the newlyweds and the Forresters? Stay tuned to The Bold and the Beautiful weekdays to find out because when Sheila Carter is around, it’s always a wild ride.