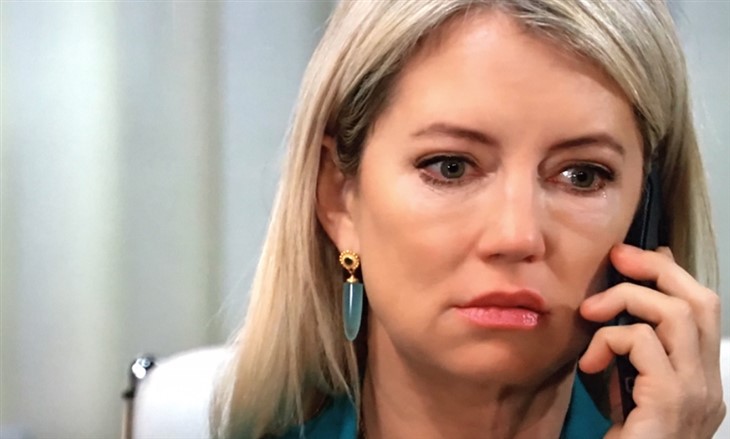 General Hospital (GH) spoilers for Friday, April 16, 2021, reveal Nina wondering what would happen if Sonny knew the truth, just as things heat up back home with Cyrus.

Sonny (Maurice Benard) used his famous Sonny skills to get information out of a stranger and now found out that Elijah (Dan White) has a criminal past. Wait till he finds out about his own self. And learning about his past could happen sooner rather than later.

General Hospital spoilers tease Nina (Cynthia Watros) sits down with her new friend and she and Sonny discuss his past — or lack thereof. While they grow closer, Nina starts to feel more guilt from keeping Sonny’s identity from him, but earlier he had said he doesn’t want to know.

On Friday, Nina asks him what he would do if he had a chance to find out who he really is. Perhaps she can help him. This gives Sonny a lot of food for thought.

Meanwhile, back in Port Charles, Carly (Laura Wright) continues to cause trouble in her quest to be the perfect mobster. When Laura (Genie Francis) pays a visit to discuss the old woman she is holding hostage, Carly won’t budge. This bothers Laura all the more cause she wants to at least help her nicer brother, Martin (Michael E. Knight).

When Laura then sees Martin she wonders what he is up to with Nikolas (Marcus Coloma). What type of deal did they strike? Nikolas is determined to bring Cyrus down but he’s going about it all wrong.

Tomorrow’s GH spoilers show Ava (Maura West) is terrified for her husband and what he’s getting himself into the pony-tailed mobster. She tells him he is going about everything all wrong but Nikolas is headstrong and rarely listens to anyone.

And then there’s the morning after for Sasha (Sofia Mattsson) and Brando (Johnny Wactor). They finally gave into passion and did the deed in the back of a parked car. Or rather a car parked in Brando’s garage. Now, Sasha wants to talk it all over and see where they stand. Is this a brand-new couple in the making. Tune into General Hospital each weekday to find out.