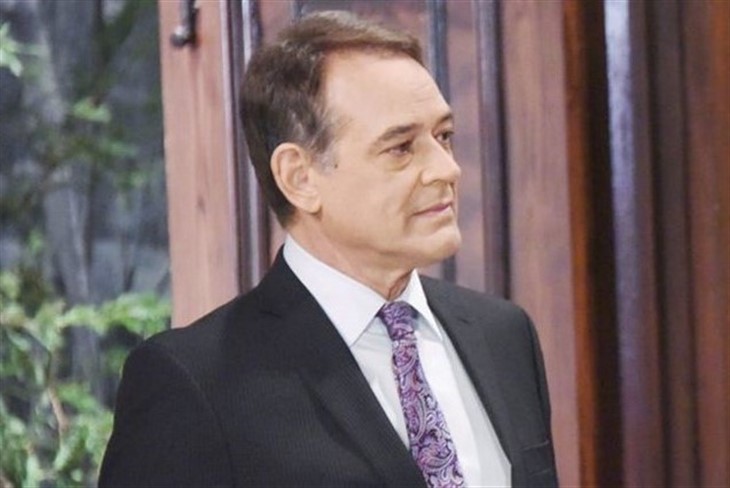 General Hospital rumors and spoilers suggest that Kevin Collins (Jon Lindstrom) is once again covering for his brother, Ryan Chamberlain (Jon Lindstrom). Will Laura Collins (Genie Frances) divorce Kevin when she learns he put her family in danger?

General Hospital’s Kevin kept Ryan’s location a secret for years so that he wouldn’t go to prison for his crimes. Ryan was a convicted serial killer and deserves to be punished. Kevin even became friends with Felicia Scorpio (ex-Kristina Wagner) who Ryan was obsessed with at the time. Thanks to Kevin and his lies, Ryan resurfaced and went on another killing spree.

Ryan also traded places with Kevin and had him incarcerated in Ferncliff on General Hospital. Ryan planned to divorce Laura and marry Ava Cassadine (Maura West). Kevin promised Laura that he would never cover for his brother again after almost dying at his hands. However, Kevin may have gone back on his word and that could cost him his marriage.

General Hospital’s Ryan Chamberlain was sentenced to Pentonville until Cyrus Renault (ex-Jeff Kober) tried to have him killed to help Nikolas Cassadine (Marcus Coloma) out. Ryan was pressuring Ava to divorce Nik and she refused. Nik believed that Cyrus could stop Ryan, but instead, he was only injured.

According to GH recaps and spoilers, Ryan came out of his coma and pretended to be in a vegetative state. However, fans knew before he left that hospital that Ryan was lying. Ava has believed Ryan was stalking her all along. However, Spencer Cassadine (Nicholas Chavez) has been the one framing Ryan. Is it time for Ryan to get revenge?

General Hospital rumors from a supposed leaked script has Laura informing Curtis Ashford (Donnell Turner) that she is filing for divorce. Laura insinuates that Kevin has once again helped his brother and that Nik and Spencer could have been killed. Upcoming spoilers suggest that Ryan will continue stalking Ava when Spencer backs off. However, Ryan’s stalking could very easily turn deadly. Ryan is by definition a killer. Kevin knows this and if he chooses to cover for Ryan again, he knows what is at risk. Does Kevin know that Ryan is very well capable of murder and still covering for him?

Ryan can always enlist help. Spoilers suggest that Ryan has help when he goes after Ava again. Does Kevin truly believe that his brother will leave Ava alone? Has Kevin not promised to do no harm? Will Laura go through with the divorce when she learns what Kevin has done? Is helping Ryan worth losing his marriage?