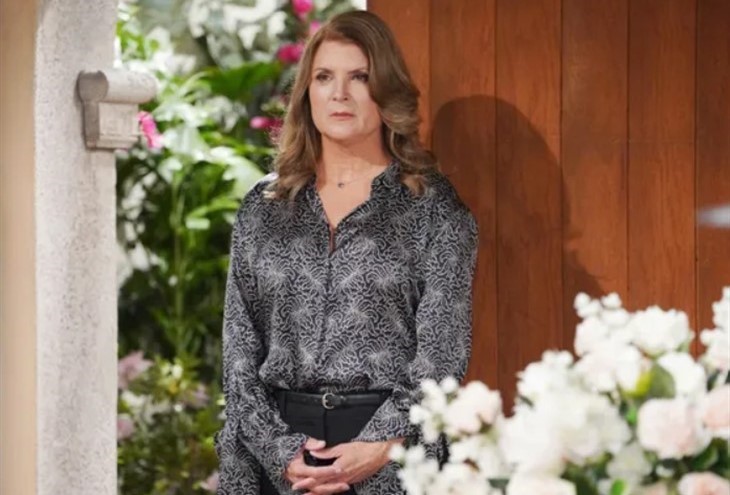 The Bold and the Beautiful spoilers document that Kimberlin Brown’s (Sheila Carter) appearance on B&B’s YouTube show, Bold Live, was worth the watch. The returning cast member provided some teasers about Sheila’s immediate future, speculated about her eventual romantic options, and discussed how this comeback was veiled for months.

Despite technical glitches, that many fans can surely relate to in their own lives, the chat session that Casey Kasprzyk, Supervising Producer of The Bold and the Beautiful, held with Brown was certainly enjoyable. Fun fan phone calls also underscored how much this actor values audience members.

Toward the end of the interactive session Brown also offered a hint at what’s to come saying, “There’s a scene coming up that we shot this week (the first full week in August) where that old Sheila is definitely coming out.”

The Bold And The Beautiful Spoilers – Emerging From The Shadows

Readers of this comprehensive soap site were preparing for Sheila’s latest comeback for more than three months, as a May 2 feature telegraphed that one of daytime’s all-time great villains was John Finn Finnegan’s (Tanner Novlan) mother. That extended heads-up provided viewers with an early preview of what’s happening now.

Sheila’s emergence from the shadows of the Forrester mansion guest house was classic soap. Has her former husband, Eric Forrester (John McCook), not had the locks changed since they were married in the mid 1990’s, or even since she was last recuperating at the mansion in 2018?

The reveal of Finn as an unknown child was an earthquake. B&B fans have seen this character’s rapid development from Steffy Forrester’s (Jacqueline MacInnes Wood) doctor last summer into the father of her son, Hayes Forrester Finnegan (no baby actor’s name known for this role), and husband.

Sinn is the show’s feel-good couple. Hayes’ birth and the wedding at the mansion projected great days ahead. Although this is soap, so hardcore fans were waiting for the ceiling to drop.

The history of both love and conflict with the Forrester family tees up more of the same this summer and into the fall. Brown didn’t rule out any romantic possibilities, including a reunion with Sheila’s greatest love, Eric. But fans will have to watch to see if the divorcing Eric would even consider another connection with this particular lady.

The Bold And The Beautiful Spoilers – What Comes Next On B&B?

Sheila’s magnificently planned and executed return has naturally excited the soap world. During the chat session Brown said that her character (Sheila) was identified in the script as Nancy. That was purposely done in order to shield the connected actors from knowing who it was, which added to the surprise factor.

As for the future of Brown’s alter ego, Sheila has been put center stage. There is no better place for this original character from The Young and the Restless to be.