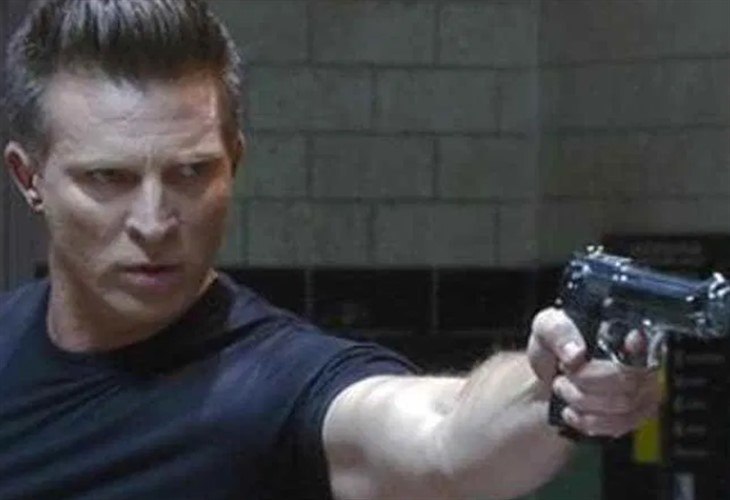 General Hospital spoilers reveal that Jason Morgan (Steve Burton) ends up shooting someone in the weekly promo. While it was speculated that Peter August (Wes Ramsey) could be killed or Jason might fulfill the pact with Franco Baldwin (Roger Howarth), it seems that it’s actually Brando Corbin (Johnny Wactor) that gets shot. However, will Cyrus Renault (Jeff Kober) be fooled?

GH spoilers reveal that the weekly promo shows that Jason fires a gun at someone. While there are tons of speculations, there is a big clue in that clip. It’s Jason’s face and body language. He looks way too calm for it to be him shooting at Peter or Franco. It seems that there might be another plan at play here.

If Jason had to shoot Brando, he wouldn’t look so cool and collected. His jaw would be tensed up and there would be “that look” in his eyes. However, everything about his facial expressions and body language and lack of having any tension in his muscles suggests this is a ploy. This seems to be confirmed by Celeb Dirty Laundry’s General Hospital spoilers, who reports that Brando is the one who gets shot.

General Hospital spoilers reveal that surprises are one of the foundation blocks of a good soap. If everything can be predicted, then why watch? Franco and Jason did make a pact. If he turns bad, then Franco asks Jason to kill him. Then there is the whole storyline with Peter and there were some clues that he might be a goner. However, now we are finding out that Jason ends up shooting Brando. So, why would he do that?

General Hospital Spoilers: Laura Gives Nikolas Advice – Can He Save His Relationship With Spencer Cassadine?https://t.co/heOj6PWiGP

Jason has great aim so if he pulls the trigger, it’s not going to be to just injure someone, but kill them. However, his calm demeanor plus the fact that Brando is just hurt and not dead speaks volumes. It is very possible that Jason shoots Brando in order to convince Cyrus that he hasn’t been double-crossed. However, will it end up working or will Cyrus know what Jason is doing?

It’s hard to say at this point, but Jason must have a very good reason for shooting, as well as only minorly injuring Brando. So, we will have to see if getting “shot by the enemy” actually works to convince Cyrus that Brando hasn’t switched sides on General Hospital.

What do you think is going to happen with Jason, Cyrus, and Brando? What do you think Jason’s reason for shooting Brando is? If it is to fool Cyrus, will it actually work or could it backfire? We will have to keep watching to find out!

The Young And The Restless (Y&R) Spoilers: Kyle Needs A Paternity Test ASAP – Is Tara Scamming Him?