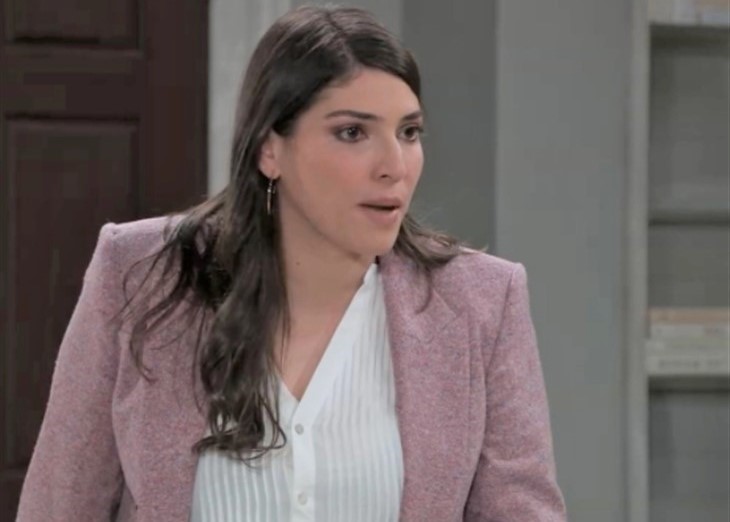 General Hospital (GH) spoilers for Wednesday, May 26, 2021, reveal Maxie seemingly missing while Brook Lynn tries to pull off a baby scheme without a baby.

General Hospital Spoilers – What Will Brook Lynn Do?

Brook (Amanda Setton) is beginning to panic. She has to pretend to give birth any minute but ‘her’ baby is not around. She hopes she somehow finds her in Beecher’s Corner but it’s taking her quite a while to escape the Qs. Michael (Chad Duell) is the first to corner her and all she can talk about is everything she’s planning turning into a disaster.

Valentin (James Patrick Stuart)also won’t leave her side and is keeping a close eye on everything she does. Maxie (Kirsten Storms) thought she had her escape all planned but forgot to look behind her. Brook better not forget to do that or she will be caught in the act. Is anyone actually onto her already? Hmmm…

GH Spoilers – Elsewhere With The Quartermaines

It’s a full house at Monica’s (Leslie Charleson) house with Valentin and Chase (Josh Swickard) both crashing there. Willow (Katelyn MacMullen) is still there too and Chase thinks he has it made. He even has his girlfriend with him and he’s worried about her.

Chase should definitely be more worried about himself and Willow should just tell him she for some reason decided she’d rather be with Michael. Someone should remind her that all of his girlfriends die. All of them.

Will the saga of Brando (Johnny Wactor) and Gladys (Bonnie Burroughs) come to an end at the hands of Cyrus (Jeff Kober)? Brando did pull that gun on Cyrus, but it looks like Cyrus gets the upper hand once again. He tells Brando he failed his test but Cyrus never managed to kill anyone, so Brando and Gladys might make it after all.

While Carly (Laura Wright) thinks she has the goods to bring Jason (Steve Burton) home, Jason might not want to come home. He’s very busy and happy with Britt (Kelly Thiebaud) at the moment. Will they take things to the next level or will Carly ruin that? She does tell someone they have to get out now, but that could be Spinelli (Bradford Anderson). Stay tuned to General Hospital weekdays to find out.