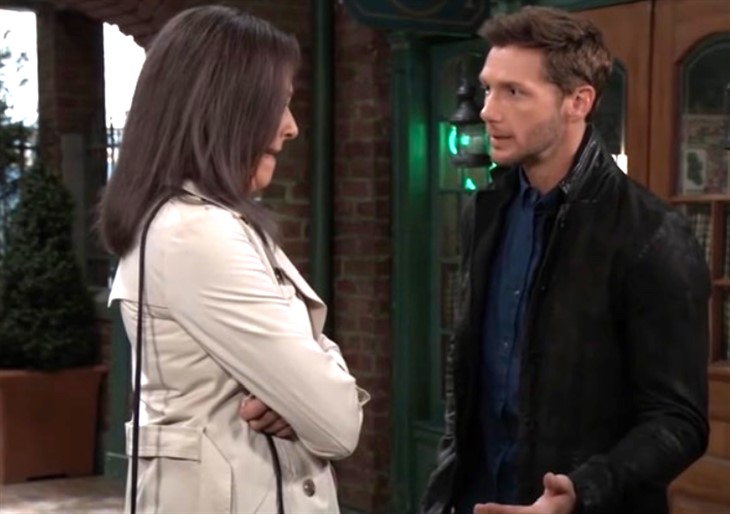 General Hospital (GH) spoilers for Tuesday, May 25, 2021, reveals Gladys still alive but in more trouble than she bargained for — but is Peter in even worse trouble?

Carly (Laura Wright) was horrified not to find Gladys (Bonnie Burroughs) in her room but she also saw signs of a struggle. She’s not dead but she is tied up with tape over her mouth, courtesy of Cyrus (Jeff Kober). It seems Cyrus likely figured out that Brando (Johnny Wactor) is Sasha’s baby daddy and he has some demands from him and is using his mother as leverage.

Brando tries to reason with Cyrus but it looks like it’s to no avail. What demands does Cyrus actually have and what does it have to do with Sasha? Meanwhile, Carly calls in Spinelli (Bradford Anderson) to help find Gladys but he still wants to know what Maxie’s (Kirsten Storms) plan is to save her baby from Peter (Wes Ramsey).

Over on the Pennsylvania side of the river in Nixon Falls, Sonny (Maurice Benard) is frantically worried about Nina (Cynthia Watros). She’s gotten herself in too deep with Elijah and he is beginning to suspect she’s not on the up and up.

As Nina tries to get more information out of Elijah (Dan White), Sonny is at the Tan-O ready to call out a search party.

While Britt (Kelly Thiebaud) is devastated to learn she has the marker for Huntington’s Disease, she is trying to look at whatever bright side she can find. At least she now knows and doesn’t have to wonder, right? Plus, she has Jason (Steve Burton) by her side being more supportive to her than he’s been to Sam (Kelly Monaco) in years.

GH Spoilers So, What Happened To Peter August?

It sure did look like Peter was pushed down the stairs, but he also seems to be fine when he is talking to Chloe (Kimberly J. Brown), the fake nurse he hired for Maxie. Is tomorrow’s episode what happens during the six hours before his “fall”? And if Peter really is down for the count, fans will rejoice through all of the social media, and then wonder whodunit. Stay tuned to General Hospital weekdays to see how this story plays out.

Days Of Our Lives (DOOL) Spoilers Tuesday, May 25: The Dangerous Search For Claire – Where’s Chloe?