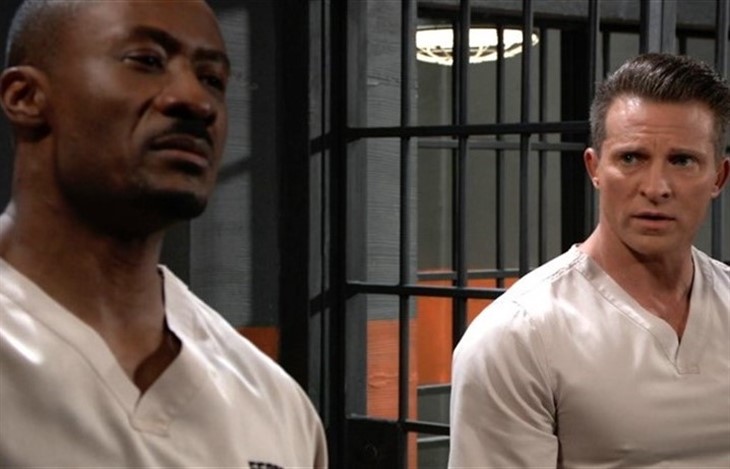 It was obvious that Carly (Laura Wright) arranged for Shawn Butler (Sean Blakemore) to become Jason’s (Steve Burton) new cellmate. That way it wouldn’t look suspicious if Shawn did something to put Jason in the hospital. Nobody had to know these two knew each other well before years ago.

Carly is quite proud of herself on Friday and pats herself on the back when she visits Jason. He’s furious that she went behind his back with the Shawn plan but is happy to no longer be behind bars.

After Carly’s hospital trip, she gets herself in more trouble than she bargained for when Cyrus (Jeff Kober) finds her and threatens her. Not to be one who takes threats laying down, Carly may be digging her own grave when she opens her big moth just a little too much.

Meanwhile, in Nixon Falls, Nina (Cynthia Watros) thinks she’s finally gotten rid of Jax (Ingo Rademacher). She just could not let him see Sonny (Maurice Benard) and ruin her plan. She may not know what her exact endgame is, but she can’t let her time with ‘Mike’ end now.

Too bad Sonny seems to have ticked off Elijah (Dan White) too much and now someone — likely Elijah — is wearing a bandana over his mouth and sporting a pistol while Sonny still sports his cowboy hat. It’s just like the Old West in Pennsylvania, right?

And in the Old West someone unexpected always seemed to be in the wrong place at the wrong time and walks into the line of fire. In the Nixon Falls version of the Old West, that seems to be what’s about to happen to Jax.

Back in Port Charles, Nina is also on Valentin’s (James Patrick Stuart) mind and he pays Curtis a visit to see if he can get any information on her whereabouts. Valentin also hovers over Brook Lynn (Amanda Setton), who may regret ever pretending to be pregnant with his child.

In happier PC news, Molly (Haley Pullos) officially graduates from law school and has a discussion with TJ (Tajh Bellow) on what her next career move will be. Too bad she can’t go into private practice with her jailbird mom.

Finally, Laura (Genie Francis) and Martin (Michael E. Knight) give sibling-hood another try and get to know each other. Will Cyrus put a crimp in their plans? Stay tuned to General Hospital weekdays to see how these stories play out.