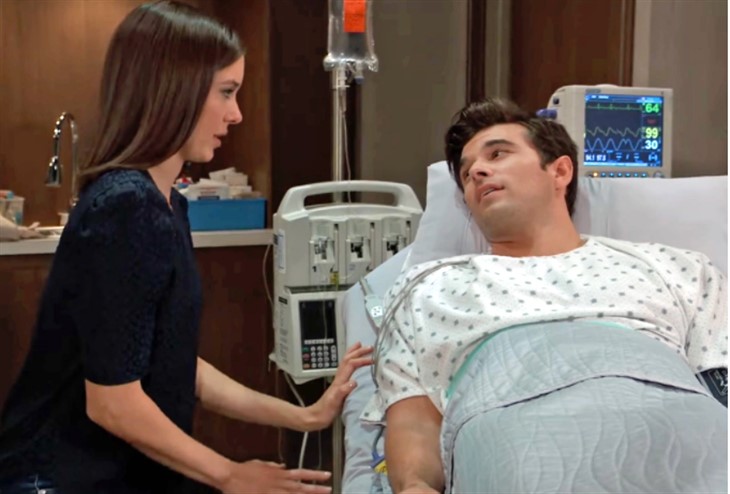 General Hospital (GH) spoilers tease that even though Michael Corinthos (Chad Duell) and Willow Tait (Katelyn MacMullen) finally declared their love for one another and began making plans for a future together, outside forces may drive the couple apart even before that happens. As viewers know, Willow was involved with Harrison Chase (Josh Swickard) until Chase pretended to have an affair with Sasha Gilmore (Sofia Mattsson), so Willow would marry Michael, giving Michael the best chance of winning full custody of his son, Wiley Corinthos (Erik & Theo Olsen) against Nelle Benson (Chloe Lanier). Although they were both heartbroken, they married and were able to win custody.

General Hospital Spoilers – Nelle Benson Is No Longer A Threat To Wiley Corinthos!

Not long after they won custody, Nelle kidnapped Wiley. Wiley was quickly rescued and although Nelle tried to get away, she fell off of a cliff and died. Her body was found and eventually identified by Chase. With Nelle no longer a threat, Michael and Willow had their marriage annulled. Around this time, Chase and Sasha’s deception came to light. Although Willow was grateful to Chase for sacrificing their love, time had taken its toll and she was no longer in love with him. She had fallen in love with Michael! Once Michael and Willow revealed their feeling to each other, Willow knew that she had to let Chase down. She had indicated that they might be able to reconcile eventually so Chase has been holding on to that hope.

GH Spoilers – Will Willow Tait give Harrison Chase The Will To Live?

When Willow arrived to break things off with Chase for good, he was deathly ill. Willow called 911 and Chase was rushed to General Hospital. As of right now, Chase can no longer feel his hands or feet, and unless a cure is found, he will likely get progressively worse. As viewers know, Chase ingested poison given to him by Peter August (Wes Ramsey). How and when Peter provides the antidote may very well determine if some of the injuries are permanent even if he cured. Chase may feel like giving up, so Willow might have to lie to Chase and tell him she is ready to reconcile. Perhaps they will even marry, especially if Willow doesn’t believe Chase will recover.

Although it will probably be touch and go for awhile, Chase will likely survive. If Willow married him, she will not be able to ruin his recovery by leaving him. When he realizes that Chase and Willow are back together, look for Michael to dive into business. He’s already mentioned to Jason Morgan (Steve Burton) the possibility of taking over the Corinthos’ family business. With Sonny Corinthos (Maurice Bernard) presumed dead, someone is needed to lead the criminal empire, so Michael could easily take that position, especially if he isn’t going to be with Willow.

Will Willow be able to end things with Chase? Or could she agree to marry him? If Willow does reconcile with Chase, will Michael take over the mob? Obligation can sometimes replace love in Port Charles, so stay tuned to General Hospital airing weekdays on ABC. And don’t forget to check back right here regularly for all your General Hospital news, information and spoilers!