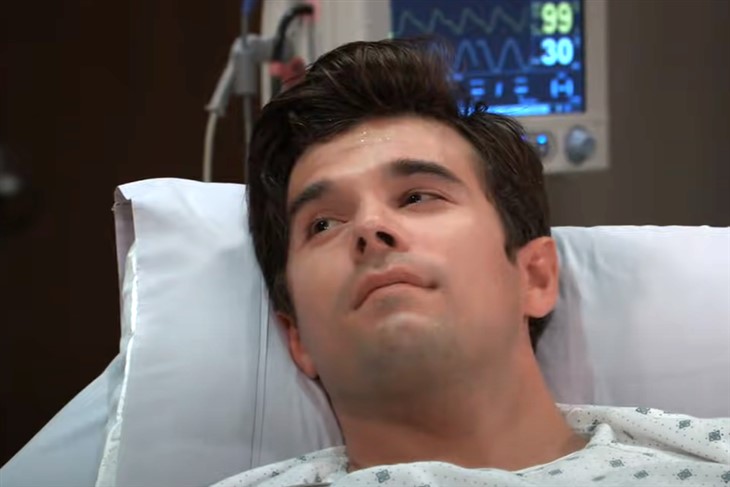 General Hospital (GH) spoilers reveal that fans shouldn’t expect a quick resolution to Harrison Chase’s (Josh Swickard) poisoning storyline. When discussing May Sweeps, the head writer hinted that it could go on a while. If that turns out to be the case, just how long will Michael Corinthos (Chad Duell) and Willow Tait (Katelyn MacMullen) hold off on their romance?

GH spoilers reveal that Hamilton Finn (Michael Easton) was the target of the poisoning. However, the victim ended up being Chase. Still in the hospital, Finn is trying his best to get through this situation. He is also trying to hold onto the secret of what is really causing Chase’s sickness, which only a few people know the truth about. We have seen Chase declare that he wants to go home but Finn knows that can’t happen. Peter August (Wes Ramsey) holds the upper hand right now and Chase going home is too much of a risk. He has to be monitored and has to be in the hospital to get the doses of antidote that Peter is holding onto.

When Chase was hospitalized with this health crisis, Willow changed gears. She was going to tell Chase about her relationship with Michael. However, Michael and Willow agreed that until Chase recovered that their relationship needed to be postponed. However, as with any similar storyline in soaps, things will get complicated and extended.

Making Willow feel even guiltier is Chase’s statement that the only thing that makes sense in his world right now is her. So, if she had any feeling of confessing to him, that pretty much stopped her.

General Hospital spoilers reveal that last week, Willow left the hospital and stopped by to see Michael. He asked about Chase, but Willow said that Michael was “more important.” That was a big clue that things are about to take a turn for the worse. This is confirmed in Soap Opera Digest and we will see Peter play games just so Chase can get another dose of the antidote.

We also have the head writers tease about May Sweeps. When speaking of Chase’s storyline and Willow’s secret, he hinted that it might be a while before this story ends. As a reminder, he said,

“But will Chase recover at all? That’s an open question.”

With the ABC soap, the writers tend to interweave different plots and lead them to one big, central storyline. We have the paternity bombshell and Cyrus Renault (Jeff Kober). There is Anna, Finn, Valentin Cassadine (James Patrick Stuart), and how Elizabeth Baldwin (Rebecca Herbst) knows the truth. So, it seems that if this poisoning is going to continue, we can expect some twists with more characters and other story arcs before we get to the big conclusion.

Big Risks To Be Together?

But how long will that take and as the head writer said, is there a chance that Chase might never recover? That doesn’t mean he will die, but he could have long-term health problems due to the poisoning. That might cause Michael and Willow to resist telling Chase the truth, but will they take big risks just to be together?

The Young And The Restless (Y&R) Spoilers: Victor Newman Helps Adam Newman With His Fresh Start