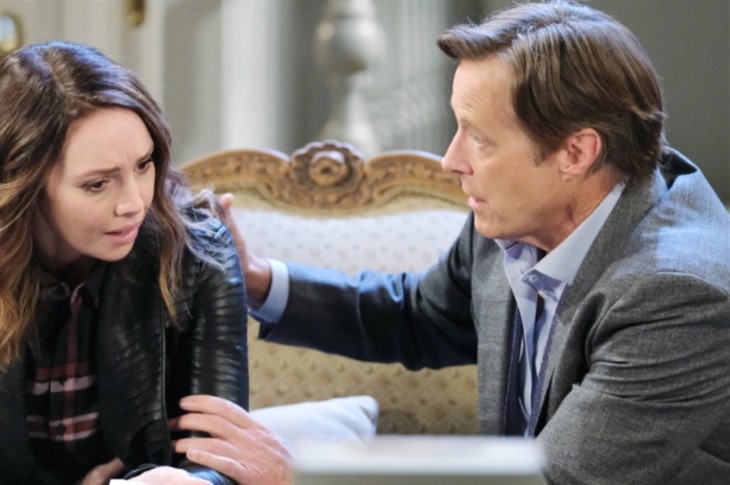 Days of Our Lives spoilers for the week of May 17 reveal that Gwen Rizczech (Emily O’Brien) confesses to her big lie. Right before Abigail DiMera (Marci Miller) leaves Salem, Gwen goes to Jack Deveraux (Matthew Ashford) and tells him the truth about her miscarriage. How will he react to learning about his daughter’s deception? Keep reading to get the details.

DOOL spoilers reveal that Gwen had a miscarriage, which was diagnosed by Dr. Snyder (Michael Lowry). Later that day, Gwen and Abigail got into an argument, which led to one of them falling down the stairs. Gwen was rushed to the hospital, nobody realizing she had already lost the baby. She used the accident to put the blame on Abigail. She let everyone believe that Abigail had intentionally pushed her down the stairs, which isn’t exactly what happened.

During the week of May 17, Dr. Snyder blackmails Gwen. This is obviously connected to the fake miscarriage. However, there must also be another reason for the blackmail. Perhaps Gwen finds out that Dr. Snyder knew Jan Spears (Heather Lindell) woke up earlier than he claimed. He won’t want that information getting out. So, he could use Gwen’s baby loss lie in order to keep Gwen quiet.

Days of Our Lives spoilers reveal that Dr. Snyder’s blackmail only works a few days. Just two days later, Gwen ends up confessing the truth. She turns to Jack and tells him that she did have a miscarriage but lost the baby earlier than everyone thinks. Now, will she also tell him about Dr. Snyder’s blackmail attempt? Or will she try to handle that mess on her own?

Plus, how will Jack react to Gwen’s confession? Even though everyone else might not be understanding or sympathetic, Jack will try to continue being there for his daughter. He is aware that Gwen has mental issues but that certainly won’t make things any better with Abigail.

Days Of Our Lives (DOOL) Spoilers: Nicole Sleeps With Xanderhttps://t.co/ygOerkgd6O

The same day that Gwen confesses the truth, Abigail will make a huge decision. She will tell Chad that she is leaving Salem. The situation with Gwen isn’t getting any better. Plus, the constant stress is stretching Abigail to the limit. It is sending her off the rails and a mental illness relapse is possible. With Gwen having the upper hand despite everything she has done, Abigail will think it’s best to leave and go stay with her mother for a while.

However, will things really be any better when she comes back? Or could Abigail return to Salem with a new plan to take down Gwen once and for all?