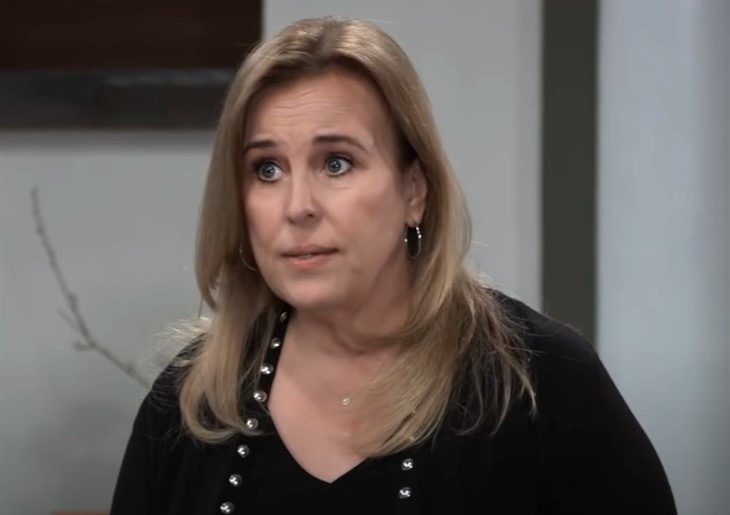 GH fans know Laura loves him as much as she does his sister Lulu Spencer Falconari (Emme Rylan) and Lucky Spencer (Jonathan Jackson). She does not have Lulu and Lucky with her in Port Charles. Lucky is in Africa doing volunteer work. Lulu is in a coma in a long term care facility.

She was put into a coma after being injured in the explosion at the Floating Rib. The person who was responsible for the explosion was Cyrus Renault (Jeff Kober). Recently on General Hospital, Laura found out that Cyrus and his brother Martin Grey (Michael E. Knight) were her brothers. Laura is not sure what she feels in regards to her brothers. Laura was unsure about Nikolas being married to Ava but has come to see that Ava loves Nikolas. They are both concerned about Nikolas’ safety.

According to GH spoilers, Cyrus has offered to make sure that Alexis is safe if Nikolas can get his mother Florence Grey (Annie Abbott) back from Carly Corinthos (Laura Wright) and Jason Morgan (Steve Burton). Florence was taken by Carly as leverage in the conflict that Cyrus has had with Jason and Sonny Corinthos (Maurice Benard) over his bringing his criminal organization into Port Charles.

GH spoilers reveal Nikolas has agreed to help Cyrus get Florence back to keep Alexis safe. Laura is worried that Cyrus will try to get Nikolas to do other tasks for him after he gets his mother back. Laura is going to try to get Alexis protection at Pentonville. Can Laura find a way to protect Alexis so that Nikolas does not have to worry about her?

Currently Ava is having some problems with someone coming after her. She has received two disturbing gifts and messages. She does not know who is targeting her. Ava needs Nikolas to be there for her. Recently Ava lost two people that she could have turned to for help. She lost her brother Julian Jerome (William deVry) who was the one who planted the bomb at the Floating Rib for Cyrus. She also lost Franco Baldwin (Roger Howarth) who was her friend for years.

General Hospital spoilers tease Ava is a strong independent woman who can normally take care of herself however she may be facing a dangerous foe. She had thought that the one that was coming after her was Ryan Chamberlain (Jon Lindstrom) because he is obsessed with her. However Ryan is in a catatonic state. Ava is trying to figure out who may want to cause her harm. Ava may have to do something to keep Nikolas safe from Cyrus. What would Ava have to do to make sure that Nikolas does not get into danger from Cyrus?

General Hospital (GH) Spoilers: Nikolas Goes To The Dark Side As Cyrus Ups His Threatshttps://t.co/6By6c0yT3t

Tune into General Hospital to find out what Laura and Ava do to make sure that Nikolas does not get into danger because of Cyrus.  Keep checking Soap Opera Spy for new General Hospital spoilers, news, and GH soap opera updates.