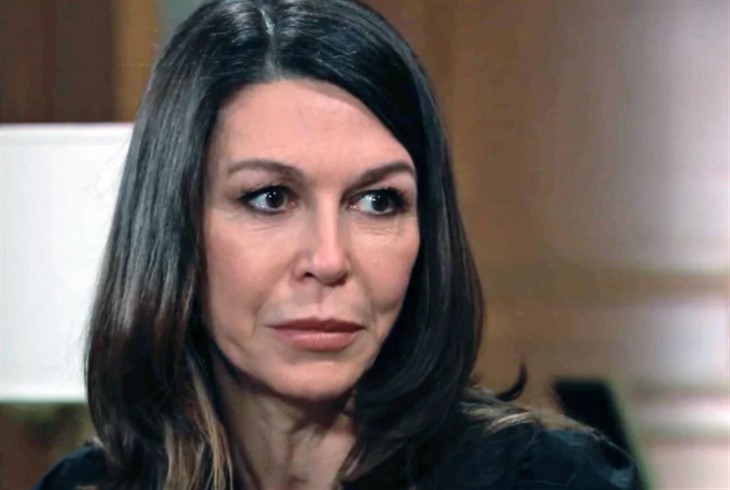 General Hospital spoilers tease that Anna Devane (Finola Hughes) will struggle with Peter August’s (Wes Ramsey) disappearance into thin air, and where he and Maxie Jones’ (Kirsten Storms) baby is. Of all people, Elizabeth Baldwin (Rebecca Herbst) who knows exactly what happened to Peter, will hope Anna finds peace in an upcoming episode of General Hospital!

General Hospital Spoilers – Elizabeth Baldwin Could Use A Little Peace Herself

General Hospital viewers know that Elizabeth could use a little peace herself. She was first on the scene after Dr. Hamilton Finn (Michael Easton) threw Peter down the stairs in a rage after Peter had thrown the antidote that he needed for Detective Harrison Chase (Josh Swickard) off the roof of General Hospital! Since then, she has kept the grim secret that she and Finn share in spite of hearing talk of a search for Peter August and knowing the world is better off without him. Anna is frustrated and blames herself for giving him the benefit of the doubt too many times, and if she had acted earlier, maybe Maxie wouldn’t be going through what she has been.

Now, not only is Peter gone without a trace, but so is Louise August (Harper and Scarlett Bloom) and the fake nurse that Peter hired. All, gone without a trace and Anna is holding herself partially responsible. Elizabeth feels a little guilty, but what is she going to do? She cannot tell the truth – she cannot throw Finn under the bus. She’s sure that if Anna knew that she wouldn’t even blame Finn – after all, Finn told Elizabeth in confidence that a remark Peter made about Anna is what really torqued him off, although he didn’t intend to kill him, obviously. Finn told Elizabeth that Peter had told him that if Chase died, it was Anna’s fault! Finn meant to shake some sense into him but instead, he had said he had might as well have killed Chase himself if he was not to survive!

GH Spoilers – Elizabeth Baldwin Sympathizes, And Hopes Anna Devane Will Have Some Peace

General Hospital viewers will recall that Elizabeth doesn’t have a lot of sympathy for the death of Peter August. If it weren’t for him, her husband Franco Baldwin (Roger Howarth) would still be alive. She can, however, empathize with Anna blaming herself – there have been times that she wished she had been able somehow to keep Franco from moving out of their home. General Hospital viewers will recall that Franco was worried he would hurt her and the boys after Cameron Webber (William Lipton) had startled him when he was asleep and he tried to choke him! But it was only a knee-jerk reaction, there was no intent behind it! Elizabeth had been unable to convince Franco not to blame himself for that bad reaction.

But she cannot go back and change anything – either about Franco’s ultimate death or about Peter’s. Peter had died instantly and she couldn’t blame Finn and secretly, she is glad that Peter is dead! Elizabeth knows that if the truth were known, there wouldn’t be anyone who would not be glad that the problem of Peter was solved, no matter how! Elizabeth reaches out to Anna. She sympathizes with Anna’s blaming herself and hopes she has some peace. She tells her how hindsight is always twenty-twenty and she needs to focus on what she can do, not what she cannot. What she can do is join the search for the baby! Anna feels like when they find Peter, they will find the baby since there has been no contact with Maxie since the day she was brought into General Hospital after she gave birth!