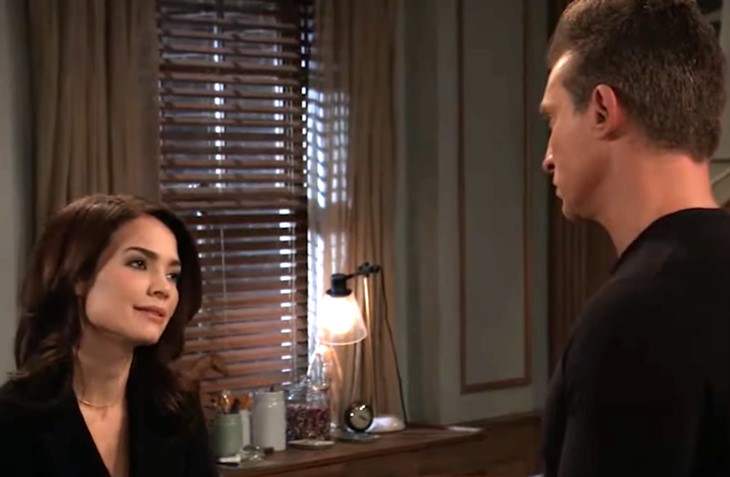 General Hospital (GH) spoilers and rumors tease that Elizabeth Baldwin (Rebecca Herbst) might have to take up Jason Morgan (Steve Burton) on his offer of help in a future episode of General Hospital. Dr. Hamilton Finn (Michael Easton) interrupted Liz and Jason before they could finish talking, but before that, it sounded like Liz was going to let Jason in on a secret!

Obviously, somehow Finn and Liz must have made the elevator work and then disabled it – unless they used another freight elevator. Britt had mentioned that there were two stairwells that would access the sub-basement, so there could be a second elevator as well. Liz is definitely nervous that Anna has figured out “Peter’s hiding place” and so she will have to have Peter moved somewhere else before he is found.

According to GH spoilers, Elizabeth knows that she can trust Jason to get rid of the body where no one will find it and no one will suspect him of moving a body. General Hospital viewers will remember that Jason immediately suspected that Liz indeed had something that she needed that kind of help with because he even asked her what she did!

GH Spoilers And Rumors – Dr. Hamilton Finn Will Want To Turn Himself In!

General Hospital spoilers tease that Finn will want to turn himself in for Peter’s murder – and that is probably because in spite of his efforts to save his younger brother’s life, Harrison Chase (Josh Swickard) appears to be partially paralyzed! Of course, Finn, with his guilty conscience, will probably blame karma because of his pushing Peter down the stairs to his death. Chase’s paralysis may have nothing at all to do with effects from the toxin he ingested, or even a side effect of Finn’s Trojan horse antidote. It could even be an unanticipated side effect from the antidote that Peter himself had provided, since Chase had several doses!

General Hospital viewers will recall that Elizabeth has tried to keep Finn from piling all the guilt over Peter’s death onto himself – one could certainly say there were mitigating circumstances. Even if the body were to be found and camera footage would have shown a struggle between the two men going into the stairwell, at the point they entered it there was no proof. The worst Finn could be charged with would be failure to report a death, as Liz would certainly vouch for him that Peter was most assuredly graveyard dead! There was no pulse, and a pool of blood beneath his head.

Had some of it been coming from his ear, that would most certainly indicate irreparable brain damage. If Elizabeth finds out that Finn plans to turn himself in, the absence of a corpse almost always is impossible to prosecute as a murder or even an accidental death; Elizabeth more than likely would take Jason up on his offer for help and bring him into the loop! If anyone knows how to dispose of a body and evidence to save someone from ruining his life and career, it would be Jason!