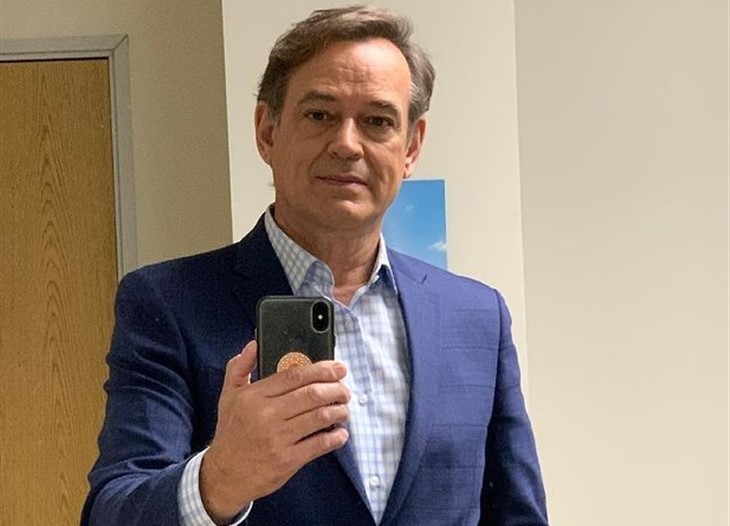 General Hospital spoilers and rumors tease that GH will lose two big parts of its cast list come this fall. Rumor has it that both Jon Lindstrom and Kelly Monaco will exit the canvas in the fall!

Longtime General Hospital viewers will remember that Jon has come and gone before. His two characters, Dr. Kevin Collins and his evil twin Ryan Chamberlain have been part of the storylines off and on since the 1990s. There is already a possibly leaked script that tells how he might leave this time.

According to GH spoilers, Laura Collins (Genie Francis) will find out that Ryan Chamberlain is not paralyzed and that Kevin has been lying to her about it and covering for Ryan, who again he is feeling much too sorry for. A current storyline has Ava Cassadine (Maura West) wanting to divorce Nikolas Cassadine (Marcus Coloma) because of a stalker leaving Ryan-like calling cards and bizarre gifts.

Part of this has been revealed to be Spencer Cassadine (Nicholas Chavez) playing very mean pranks in order to get Ava and his father to divorce because he doesn’t like Ava. However, if the leaked script is legitimate, Ryan also is much more involved in this stalking than is revealed now, and it will come to light that Ryan has been after both Spencer and Nikolas, likely to get to Ava.

However, as longtime General Hospital viewers know, Ryan has never let husbands, boyfriends, parents, etc., keep him from an object of his obsession! In this leaked script Laura divorces Kevin and he goes on a drunk and then heads for Lucy Coe (Lynn Herring) for comfort, and this leak, if it is one, may imply that Lynn Herring will exit also along with Jon Lindstrom!

Kelly Monaco has been on the General Hospital canvas as Samantha McCall for a long time also, although not nearly as long as Jon Lindstrom has. Even though she is best known for her pairing for many years with Steve Burton’s Jason Morgan, when she first came to General Hospital she was a con woman taking care of her younger special needs brother. She was looking for a set of cards called “The Dead Man’s Hand”. She teamed up with Jasper “Jax” Jacks (Ingo Rademacher) at that time, with Jax believing the lucky cards could save his ailing father’s life. The two became lovers, but that didn’t last long when he found out he didn’t reach his father before he died due to Sam sabotaging his car.

She then becomes involved with Sonny Corinthos (Maurice Benard) when he was going through a rough patch in his marriage, and became pregnant. However, Sam lost the baby, which was a little girl. It was after this that Jason befriended her and they became involved, in a relationship that has lasted for about ten years, although on and off. When Jason was presumed dead on General Hospital, Sam rather quickly moved into a relationship with Silas Clay (Michael Easton) and then with Patrick Drake (Jason Thompson) when Robin Scorpio-Drake (Kimberly McCullough) was presumed dead.

More recently on General Hospital she became involved with Jason’s formerly identical twin Drew Cain (then Billy Miller) thinking he was Jason with plastic surgery and amnesia. The truth was not revealed until Jason himself returned. But with Jason now marrying Carly Corinthos (Laura Wright) and Sam clearly not being ready to move on, she may be written into a corner as far as a love life is concerned.

The Bold And The Beautiful Rumors: John Finnegan’s Real Mother Is Quinn Forrester?

90 Day Fiance: Deavan Clegg Shares Love For K-Pop As She Plans To Dye Her Hair