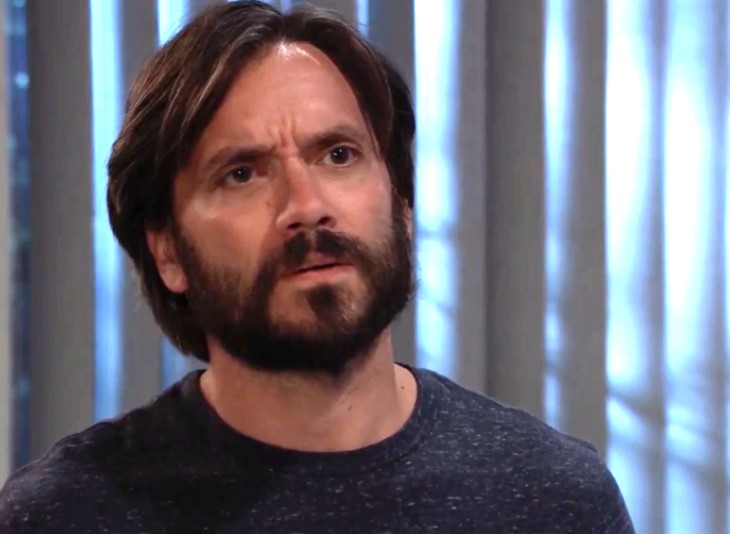 General Hospital (GH) spoilers tease that Maxie Jones (Kirsten Storms) may not be able to keep her baby lie up much longer. She can fool most of the people most of the time, but can she fool someone who knows her very well? This someone is a trained detective to boot, and he definitely knows how to unravel a con when he sees and hears one.

Dante Falconeri (Dominic Zamprogna) is assigned to figure out what the heck Maxie is talking about when she launches her tale of baby Louise being taken by an evil nurse who was hired by Peter August (Wes Ramsey).

Explosive General Hospital spoilers reveal that Dante is determined to get to the bottom of this confounding mystery and to this end, he starts grilling Maximista like a T-bone. Apparently, someone will walk in in the middle of the intense sesh and tell Dante to back off.

Who has the guts to try and bring Dante to heel on General Hospital? Someone who could be having feeling feelings for the hunky policeman—a through and through con artist herself.

Yep, it’s Sam McCall (Kelly Monaco) who interrupts Dante’s work (again). She previously slashed his tires so that he couldn’t get to Jason Morgan (Steve Burton) before she did. She was successful then, will she triumph again?
Not if Dante has anything to say about it! But he does agree to back off Maxie for a bit after Sam’s passionate pleas.

According to Zamprogna, “I’m not sure where this is going but Dante and Maxie have a friendship where he’s concerned.” He told Soap Opera Digest that he personally hopes that Dante plays a big role in the unfolding story noting that he and Storms have known each other for forever and he enjoys acting opposite her.

“Our scenes are always easy to play because I care about Kirsten and we have a pretty rich history together,” he added.

General Hospital Updates & Spoilers – What Happens Next In Port Charles?

General Hospital spoilers indicate Dante is a dogged and diligent cop and there is every chance he will crack the case. Maybe he does it with Maxie’s help if she decides to come clean to him. For now, fans will get to see some excellent scenes as Dante and Maxie square off. Already fans are talking about an Emmy for Storms after her riveting performance when she confronted Peter.

Maxie called the cad and killer every name in the book including his given one!  Be sure to catch up on everything happening with GH right now. Come back here often for General Hospital spoilers, updates news, and updates.

Days Of Our Lives (DOOL) Spoilers: Abe & Paulina Get Closer