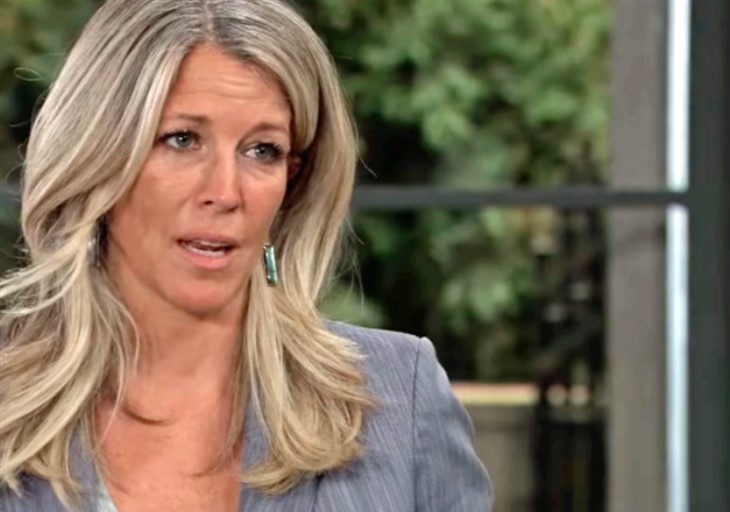 General Hospital spoilers for Wednesday, September 29, 2021, reveal Carly Corinthos ready for war and Nina Reeves might want to fear for her life.

Sonny Corinthos (Maurice Benard) may not want to get angry, but anger often seems to be the only emotion that Carly (Laura Wright) knows. The news that Nina (Cynthia Watros) knew that Sonny was alive for months and didn’t say anything just because Carly was unnecessarily but characteristically horrible to her on the phone is enough to drive Carly over the edge. After all, she let herself dream about a life with Jason Morgan (Steve Burton) after all this time all because Nina didn’t bother to inform her that her husband was alive.

Nina actually looks like she can dish it as well as she takes it and this showdown in the middle of Monica Quartermaine’s (Leslie Charleson) living room looks like one for the ages. Hide NuWiley and get Yuri in to diffuse the situation fast.

Is Sonny looking for medical care already since he ends up at General Hospital to thrill Epiphany (Sonya Eddy) with the fact that he is alive? While there, Sonny wonders if Carly is now protected. Is Jason falling down on the job?

Meanwhile, Josslyn Jacks (Eden McCoy) is fascinated by something she sees at GH. Does it have anything to do with Sonny or is this all about Esme Prince (Avery Pohl)?

General Hospital Spoilers – The Teens Are Coming For Spencer Cassadine

As Esme reminds Spencer that she’s always right, Trina Robinson (Sydney Mikayla) and Cameron Webber (Will Lipton) think they have the perfect plan to trap Spencer and prove he is Ava Jerome’s (Maura West) stalker. Do they inform Nikolas Cassadine (Marcus Coloma) what is going on as he finally figures out how to keep Ava safe?

And is this all for naught? Ava doesn’t seem to want the divorce and she is certainly taking her own sweet time in leaving town. Scotty Baldwin (Kin Shriner) tells her it’s time she makes up her mind about what and who she really wants. Stay tuned to General Hospital weekdays to see how these stories play out.