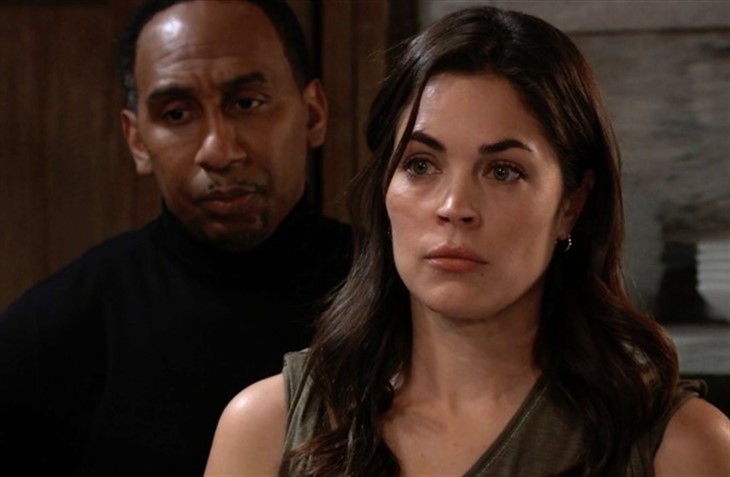 General Hospital (GH)  spoilers for Wednesday, May 5, 2021, reveal Jason still struggling at the safehouse while Britt remains by his side. And at the police station, Elizabeth is ready to save her son.

As soon as Jason (Steve Burton) woke from his makeshift surgery, he asked for Carly (Laura Wright). Clearly, she was his first thought. Heck, he didn’t even ask where Sam (Kelly Monaco) was. Perhaps he was just worried that Carly would take what she thinks is her rightful place with the Five Families and make everything worse for both of them.

As Britt (Kelly Thiebaud) remains committed to helping Jason, she asks Jason if he stopped talking because he already said too much.

It’s Carly who says a whole lot at that large wood shack that dubs for a Port Charles mob meeting place. She tells Cyrus (Jeff Kober) point-blank: “I’m calling the shots now and you don’t want to make yourself a target.”

At the police station, Elizabeth (Rebecca Herbst) is furious that Jordan (Briana Nicole Henry) arrested Cameron (Will Lipton) but what choice did Jordan have with Cam standing there pointing a gun at her?

Jordan still has a whole lot more questions but Elizabeth doesn’t want to answer them and tells Jordan that she doesn’t like being interrogated. Meanwhile, poor Cameron is afraid he really is the one who shot Jason.

General Hospital (GH) Spoilers: What Will Liesl Do Next?https://t.co/GrnZNnZThp

Over in Nixon Falls, Nina (Cynthia Watros) and Sonny (Maurice Benard) grow closer as Sonny tells Nina he is really paying attention to her. But on the way back from Nixon Falls, Jax (Ingo Rademacher), Joss (Eden McCoy), and Trina (Sydney Mikayla) are confused.

Josslyn wants to know if Trina has any more details on the place where she got the great spaghetti sauce while Jax wants to know why Carly seems to be missing.

Joss should really get a taste of that spaghetti sauce and know that nobody in the world makes a sauce like that except for her stepdad Sonny. Boy, would that make Carly happy? Stay tuned to General Hospital weekdays to see if anyone tastes the sauce Trina brings home from Pennsylvania.