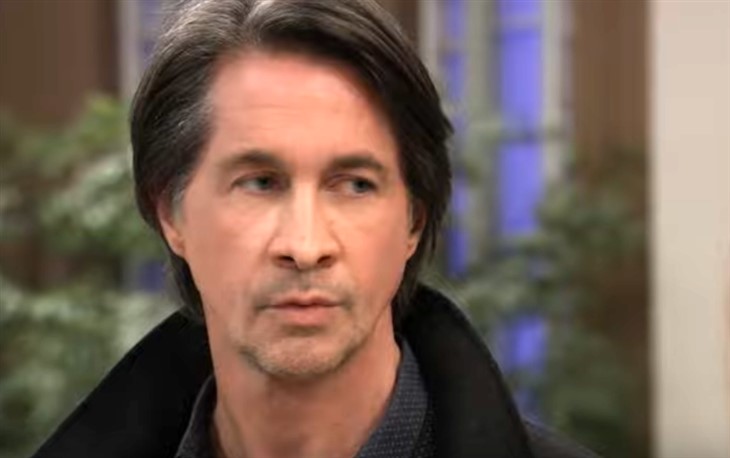 General Hospital (GH) spoilers tease that Hamilton Finn (Michael Easton) has a conscience problem. He pushed Peter August (Wes Ramsey) down and apparently the cad is dead. That’s soap opera dead, so don’t count on it.

Liz Webber (Rebecca Herbst) is in on the secret and these two are in cahoots about hiding the body. Except that Finn cannot stomach taking a life, not saving a life, as per the Hippocratic Oath!

What will he do next that could endanger his and Liz’s freedom?

According to Soap Opera Digest, Finn could make a beeline for the cops and that would not be a good idea as Liz doesn’t want to be an accessory to murder. Co-head writer Dan O’Connor says that, “Finn is not someone who has much experience with a life of crime and the truth is, it wasn’t an accident.”

So if Finn confesses, he’s looking at a murder charge which would be most inconvenient seeing as how he is the only GH doc who saves lives these days.

Finn goes to the lengths of getting a hold of Scott Baldwin (Kin Shriner) to help him facilitate a confession. Whatever happened to that scorching romance between Scott and Liesl Obrecht (Kathleen Gati)? Are fans to be strung along with this sizzling pair who we saw make a love connection, and then the ball is dropped? As a side note Scott and Liesl make a great pair and it would be a shame if the show dispenses of them.

General Hospital spoilers: What Happens Next in Port Charles?

According to the GH exec, “Elizabeth is determined not to let anyone lose their life or freedom because of Peter.” Does this mean she will run interference and stop Finn from confessing? For now they think Peter’s corpse is tucked away in the GH subbasement where they stashed him in a refrigerator.

Spoiler alert: Peter’s body goes missing! This sets up all sorts of consequences and we don’t want to give too much away but we can tell you that romance is brewing on the horizon for Finn and Liz. What better way to bond than by running from the law? At the same time there are explosive rumors about a return to Port Charles by Hayden Barnes (Rebecca Budig) Finn’s ex and baby mamma. Is there a torrid triangle about to go down? First, Finn must stay out of jail!