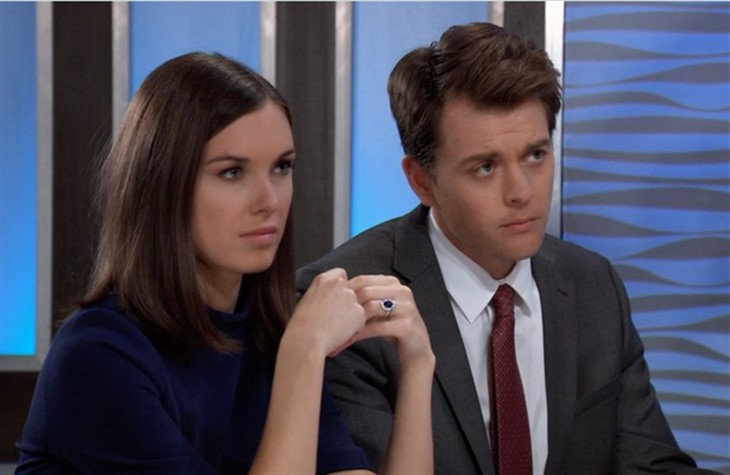 General Hospital (GH) spoilers for Wednesday, June 23, 2021, reveal in Port Charles, NY the cat seemingly having Michael and Willow’s tongues because neither one of them can bring themselves to actually tell the truth. In fact, they seem absolutely silent.

We could all see the look of relief and dread (mainly dread) when Willow (Katelyn MacMullen) learned that Chase (Josh Swickard) was going to live after all. A miracle! She just married the man less than an hour earlier to give him his deathbed wish and it turns out it wasn’t his deathbed. What should she do now? She wants to be with Michael (Chad Duell), not Chase. And now she finds herself married to the wrong man for the second time in the course of a year.

Brook Lynn (Amanda Setton) knows what Willow and Michael need to do so she reads them the riot act for continuing to lie to Chase for absolutely no reason. They both stand there stunned silent as Brook goes off about tricking people. They are good people. They don’t do bad things. How dare Brook Lynn say all this. And they don’t even know the trick she is playing on the entire family — especially Valentin (James Patrick Stuart), who is not really family but he may as well be at this point.

Britt (Kelly Thiebaud) and Jason (Steve Burton) haven’t had too much time alone since they made love in that safe house in Canada and they still don’t have time alone. That doesn’t stop them from flirting at the gym, but where will the flirting lead?

Elsewhere, Brando (Johnny Wactor) and Sasha (Sofia Mattsson) enjoy their first official date. It’s about time they did this since Sasha looks like she’s about to give birth next month.

Over at Pentonville, Alexis (Nancy Lee Grahn) and Shawn (Sean Blakemore) go over his case once more and make a huge discovery. Does this discovery have to do with a heartbroken Nikolas (Marcus Coloma), the man who Ava (Maura West) just broke things off with?

Elsewhere, Molly (Haley Pullos) and TJ (Tajh Bellow) celebrate five months as official domestic partners and discuss their parents. They wonder if Shawn is the mysterious ‘client’ that Alexis has in prison.

Carly (Laura Wright) has been mourning a husband who is alive since Christmas. Elizabeth (Rebecca Herbst) has been mourning a husband who is very much dead since March. Somehow this means they have something in common so they bond over their mutual widowhood, although Carly’s isn’t real. Elizabeth also apologizes to Carly for blaming Jason for Franco’s (Roger Howarth) death, but can they really let bygones be bygones? Stay tuned to General Hospital weekdays to see how these stories play out.