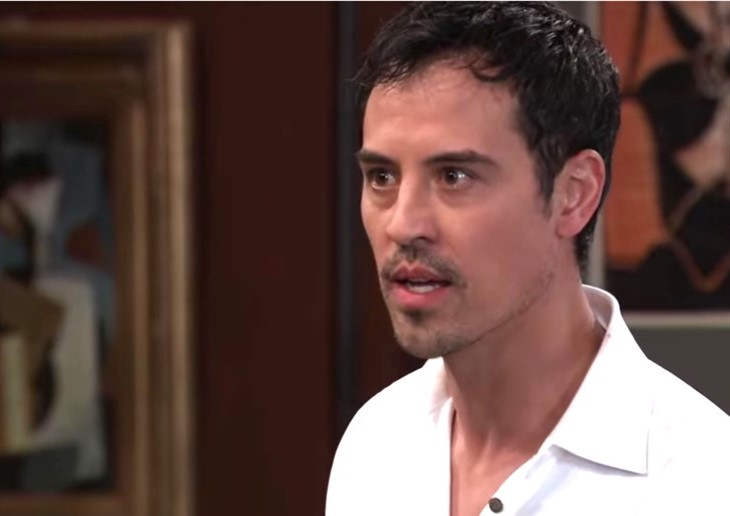 General Hospital (GH) spoilers for Wednesday, July 21, 2021, reveal in Port Charles, NY Nikolas trying to get himself out of a whole much of the town is supposed to know he is in.

Nikolas (Marcus Coloma) paid someone to have Hayden Barnes (Rebecca Budig) killed while Shawn was trying to take out Jake Doe on Sonny’s (Maurice Benard) orders, not realizing he was Jason Morgan, or at least Jason’s twin-with-plastic-surgery Drew Cain (Billy Miller).

We do see that Jordan (Briana Nicole Henry) has no idea what really happened because he is investigating things to help Shawn and Nikolas does his best on Wednesday to find out what she does know. Does she wonder why he is fishing for so much information and will she tell him anything?

Elsewhere at the Metro Court, Stella (Vernee Watson) has a bone to pick with a newly-released Shawn. Is it time for her to get her word in about his long-ago affair with Jordan that produced TJ?

Meanwhile, Spencer (Nicholas Chavez) continues making a splash at the Metro Court pool when he surprises Britt (Kelly Thiebaud). She has been pretty miserable lately so Spencer certainly is a sight for sore eyes. Elsewhere, Ava (Maura West) questions Trina (Sydney Mikayla) about the new boy in her life. Will Trina betray Spencer and tell Ava who that boy really is?

General Hospital Spoilers – Harrison Chase Has Had It

It turns out Chase (Josh Swickard) is more frustrated with his current situation than we originally thought. He takes his frustrations out on Willow (Katelyn MacMullen) by getting angry with her. But he admits he is really angry with himself because he can’t be a proper husband to her. Does anyone think Willow actually cares about that at this moment? Stay tuned to General Hospital weekdays to see if Willow ever tells Chase the truth.

The Bold And The Beautiful (B&B) Spoilers: Quinn And Carter Put To The Test – Paris’ New Life