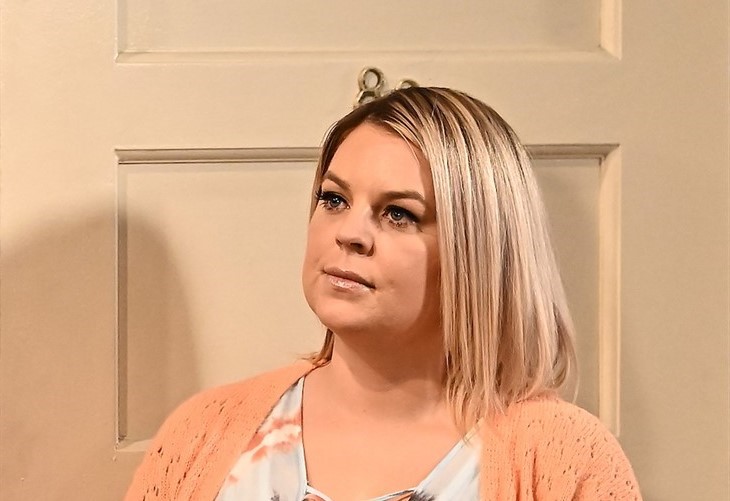 General Hospital (GH) spoilers for Tuesday, September 28, 2021, reveal that Maxie Jones has a big ol’ bus she’s ready to back up right over her sister-in-law, Nina Reeves. Beep. Beep.

Now what could Maxie (Kirsten Storms) be doing in the Corinthos Kitchen? That’s what Carly Corinthos (Laura Wright) wants to know. What could she possibly have to tell her? Well, it’s about Nina, you see and Carly better sit down for this one. And be nice. Just be nice and don’t go Carly all over Nina because that’s how Carly kinda-sorta got herself into this mess to begin with.

Carly tells Maxie to spill it, so Maxie does and tells her all about Nina’s months in Nixon Falls with a man named Mike…who just maybe was really Sonny (Maurice Benard). When Carly goes ballistic, Maxie once again begs her to be nice, but we don’t think that’s going to work out very well. This is Carly, after all, and Carly is rarely nice to anyone.

GH Spoilers – Nina Reeves Has A Confession To Make

Meanwhile, Nina decides since she is back in Port Charles that it’s time to spend the day with Wiley so she heads over to the Quartermaine’s and the usually-oblivious Michael (Chad Duell) and Willow (Katelyn MacMullen) determine that Nina is acting weird.

Well, things are about to get a whole lot weirder when Nina tells them that it’s time they knew something. We have to hand it to Nina for having some courage.

Anna Devane (Finola Highes) and Valentin Cassadine (James Patrick Stuart) are really enjoying all their travels as they search far and wide across the globe for one mustache-twirling nefarious man who managed to almost be dead and walk right out of a freezer. Little do they know that he’s on Cassadine Island. And little do they seem to care as Valentin has a bit too much to drink and tells Anna a few things he may or may not regret.

Over in his prison dungeon, Drew Cain (Cameron Mathison) then gets a surprise courtesy of Peter (Wes Ramsey) and Victor Cassadine (Charles Shaughnessy). Liesl Obrecht is now in prison with him and he REALLY wants to know what the heck is going on. Stay tuned to General Hospital weekdays to see how these stories play out.

General Hospital Spoilers: Jason And Carly Might Have Unfinished Business