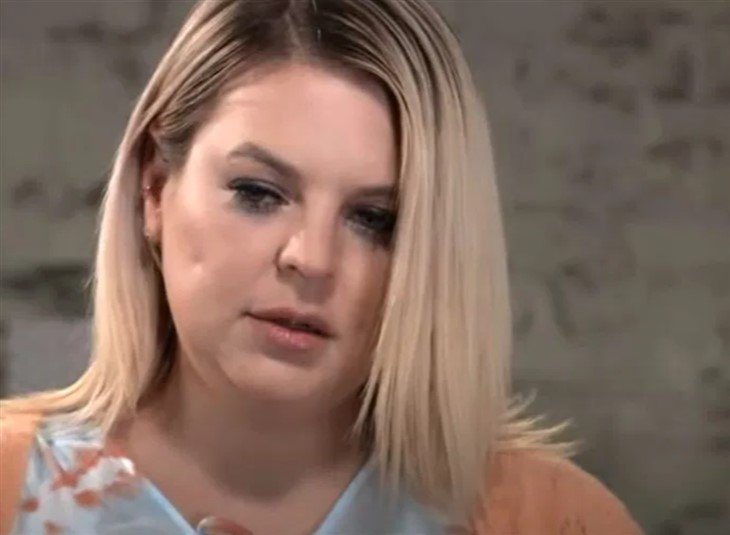 General Hospital spoilers for Tuesday, June 22, 2021, reveal Maxie about to crack as she stares at her baby and wonders if she will ever hold her again.

Brook Lynn (Amanda Setton) is thrilled that Chase (Josh Swickard) is going to live but when she gets home she is freaked out by what she finds. Maxie (Kirsten Storms) is in the living room over the baby’s bassinet and Olivia (Lisa LoCicero) is about to let her hold the little girl.

This is not how Brook planned things and cannot have Valentin (James Patrick Stuart) getting suspicious about why Maxie is so interested in “their” baby. However, when Maxie and Brook Lynn discuss how Maxie is about to lose it if she can’t be with her child, Brook thinks she’s come up with a solution. We can see her hiring Maxie as a nanny but we can’t see Valentin being too happy about it.

Speaking of Valentin, he is quite curious when Jordan (Briana Nicole Henry) and Dante (Dominic Zamprogna) tell Anna (Finola Hughes) all about what Dante found in the woods. Valentin wants to help Anna find Maxie’s baby as he thinks it’s also a way to finally track down Peter. This is also something that could send Maxie and Brook into more of a panic.

Over at General Hospital, Chase wants to know what was in this miracle cure that Finn (Michael Easton) gave him. Now it’s time for Finn to deliver the news that things can go back to normal and he and Chase are brothers after all. No more awkward father-son stuff from here on out.

Will Willow (Katelyn MacMullen) find the guts to also tell Chase the truth? There really is no reason to pretend to be in love with him anymore, but we’re sure Willow will come up with one somehow.

Ava (Maura West) is convinced Ryan Chamberlain (Jon Lindstrom) is after her again, even though Dante assures her the recording in Avery’s bear could be a deep fake. Either way, Ava wants her loved ones away from her. She already sent Avery to stay with Carly (Laura Wright) and now she tells Nikolas (Marcus Coloma) to go back to Wyndemere and not return to her room at the Metro Court. Stay tuned to General Hospital weekdays to see how this story plays out.