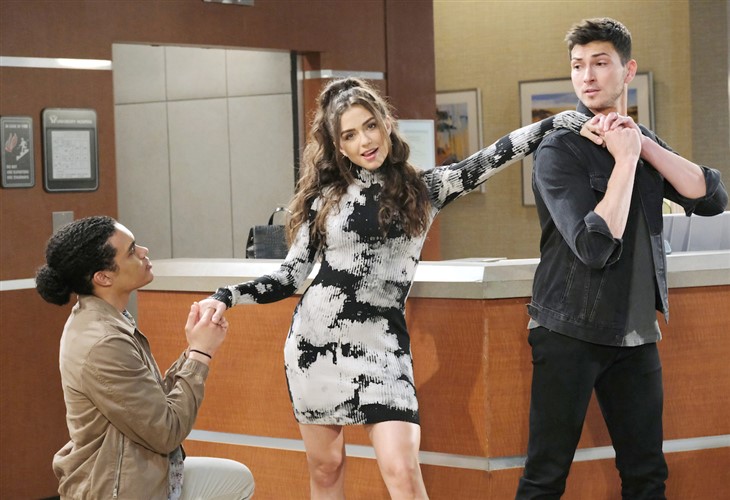 Days of Our Lives comings and goings reveal that Ciara Brady (Victoria Konefal) and Theo Carver (Cameron Johnson) return to Salem. Fans already knew that Ciara would show back up this summer, but we now know when it happens. How will Ben Weston (Robert Scott Wilson) react and what brings the pair back to town?

Days Of Our Lives Comings And Goings – Ciara Brady’s Demand

DOOL comings and goings reveal that Ciara sent Ben divorce papers a few weeks ago. Ben reeled over the unexpected delivery. He knew that Ciara left with Theo for South Africa. However, he honestly believed that eventually, Ciara would come back to him once her memories returned. He never expected her to send divorce papers.

During a recent episode, Ben confided in Rafe Hernandez (Galen Gering). He told him that Ciara keeps calling and asking him to sign the divorce papers and send them back to her. However, he just can’t bring himself to sign them.

Head writer Ron Carlivati previously confirmed that Ciara would be back this summer. However, it was not known until now that Theo would also make a return. Expect Theo and Ciara to be back in Salem during the week of June 28.

Days Of Our Lives Comings And Goings – Waiting For Ben Weston

Days of Our Lives comings and goings reveal that Ben comes home and his heart flutters by what he sees. It’s Ciara standing at his door waiting for him. He hopes that this means that Ciara has come home to him. However, that is not the case. She demands that Ben immediately sign the divorce papers. She seems to be really stressed and pressured, indicating that the divorce being finalized is an emergency. This makes Ben wonder why she needs the divorce right now.

He also knows that this might be his last chance to get Ciara back. So, he makes a decision on how to handle it. However, will he succeed in getting her to remember their love or could it make him lose his wife forever?

It is confirmed that we will have to wait to find out if Ben’s plan works or not. The Olympics will be airing on NBC for two weeks. That’s a long time to wait to get answers. It is stated that Ben and Ciara’s story will end on a cliffhanger and we won’t find out if “Cin” will get back together until the soap returns to the air.

The one piece of hope that we have is Carlivati previously teased that “Cin” fans will get the payoff they have been looking for. So, we expect some good news. We will keep you posted with new developments and updated information.