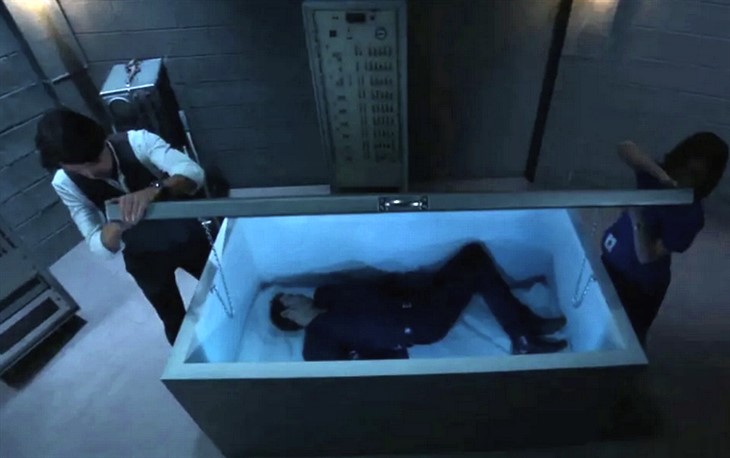 General Hospital (GH) spoilers for Tuesday, July 27, 2021, reveal in Port Charles, NY Anna and Finn ready to take a deep dive into a deep freezer, but what will they find?

It’s the moment of truth as Finn (Michael Easton) finally confesses to Anna (Finola Hughes) that Peter (Wes Ramsey) is indeed really and most sincerely dead and that he stashed the body in the deep freezer they’re standing in front of. Anna asks if he was acting alone and Finn won’t say but she has to believe it was Elizabeth (Rebecca Herbst) at this point.

Meanwhile, Jason (Steve Burton) has already been in the basement and may or may not have moved Peter’s body if he even found a body. He does place a phone call saying he has important information. Elizabeth also places a phone call and Scott (Kin Shriner) comes running as she wants to know the law defines justifiable homicide.

Over at the pool everyone is now visiting, Josslyn (Eden McCoy) can’t wait to tell Carly (Laura Wright) about her and Cam (Will Lipton) now dating, but Spencer (Nicholas Chavez) interrupts and delays her. When Joss finally gets her news out she talks of how she and Cam were good friends and it turned into something more. She then asks her mother if that’s the same thing that happened between her and Jason.

Curtis (Donnell Turner) has known for years that Nikolas (Marcus Coloma) had Hayden (Rebecca Budig) shot but for the sake of this new rewritten story, we now have to pretend he doesn’t, as he and Shawn (Sean Blakemore) hook up and discuss finding the culprit. Curtis already found the culprit when Shawn led Hayden to his old friend to help her discover who put her in a coma for months, but this is a new year, a new decade, and a whole new story, apparently.

Speaking of Curtis, Portia (Brook Kerr) tells Trina (Sydney Mikayla) how she and Curtis might give romance another shot and reveals they knew one another in the past. How will Trina react to this news? Stay tuned to General Hospital weekdays to see how these stories play out.

Days Of Our Lives (DOOL) Spoilers: E.J. Wants To Hurt Sami Through Nicole And Allie