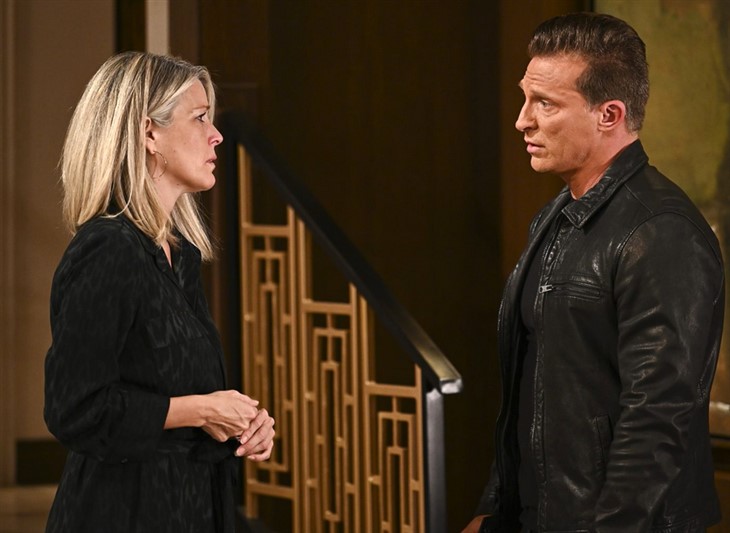 General Hospital (GH) spoilers for Tuesday, August 11, 2021, reveal that Jason Morgan (Steve Burton) and Carly Corinthos (Laura Wright) are getting ready to meet with the Five Families and state their case. Will they believe that Jason and Carly are suddenly madly in love?

Carly keeps telling herself she is only marrying Jason because they have to show the Five Families that they can be in charge of Port Charles organized crime together. However, most people realize that Carly has been desperate to marry Jason most of her adult life, and now is her chance. Jason looks like he is sickened by the whole thing and who can blame him? That doesn’t mean he doesn’t do the best he can to make people believe this marriage will be for love.

And now they have to convince the Five Families of the same thing. They are getting ready to meet them on Wednesday and vow to put up a united front so these criminals in a warehouse never suspect a thing.

Meanwhile, Britt (Kelly Thiebaud) is still hurt that Jason got her to trust him and then dumped him for Carly. At least she has her mother to come to her defense as Liesl (Kathleen Gati) tells Britt that she made sure what he did will haunt Jason forever….

As soon as Ava (Maura West) hears that Spencer (Nicholas Chavez) is going to throw a party in his island castle, she asks Trina (Sydney Mikayla) if she had anything to do with that. She then gives Trina some good advice. Will the teen take it?

Over at Wyndemere, Nikolas has a visitor and it’s his mother. She is worried about Spencer and thinks he is up to something. Nikolas then tells Laura (Genie Francis) that he accused Spencer of doing something and has to ‘fess up about the letter from Ryan (Jon Lindstrom).

Curtis (Donnell Turner) is still at a loss about what to do regarding the two women in his life — as well as his sick and meddling aunt. Stella (Vernee Watson) is still in the hospital and still insists that he belongs with Jordan (Briana Nicole Henry). And then there is Jordan who really wants her husband back, but also feels bad for Portia (Brook Kerr). Stay tuned to General Hospital weekdays to see how these stories play out.