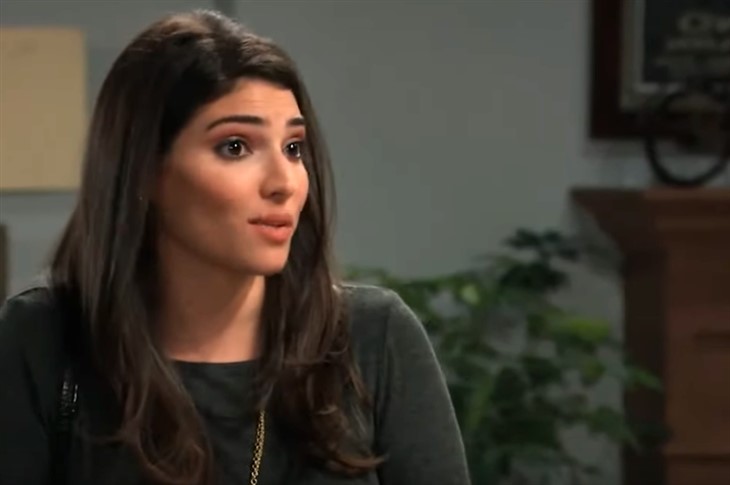 General Hospital (GH) spoilers for Thursday, July 22, 2021, reveal in Port Charles, NY keeping up with those new mother appearances may be way too hard for Brook Lynn as her heart softens towards the man she has been tricking for months.

General Hospital Spoilers – The Guilt Becomes Too Much For Brook Lynn

As Valentin (James Patrick Stuart) grows more attached to Bailey Louise, Brook Lynn (Amanda Setton) finds it harder and harder to keep lying to him. What started off as a plot to get ELQ back for her family has turned into something more as she truly wants to keep the baby protected.

She also sees the way Valentin is with the baby and the guilt starts getting to her. Nina (Cynthia Watros) already asked Brook to tell him the truth, assuring her she’d keep the secret. Is Brook Lynn about to do just that?

As Brook Lynn’s guilt takes over, Anna (Finola Hughes) and Valentin discuss the entire Peter (Wes Ramsey) situation and she decides to fill Dante (Dominic Zamprogna) in on what they learned at Ryan’s Bar in New York City. Will it occur to either one of them that the description of the man on the roof matches that of one Dr. Hamilton Finn (Michael Easton).

While Dante goes over this mystery with Anna, Sam (Kelly Monaco) is at the Metro Court having a talk with Olivia (Lisa LoCicero) and asks her if Dante told her about something. Does Dante actually kiss and tell…his mother? This is probably quite an embarrassing moment for Sam because Dante is a far cry from life with Jason Morgan (Steve Burton).

As Stella (Vernee Watson) and Jordan (Briana Nicole Henry) discuss whether Jordan really wants to divorce Curtis (Donnell Turner), he has clearly moved on and is at The Savoy opening flirting with Portia (Brook Kerr). Might Jordan be too late to stop this divorce? It looks like Curtis is ready to move on without a wife who is always keeping secrets.

Finally, Brando (Johnny Wactor) tells Sasha (Sofia Mattsson) he wants to be with her and build a family with her. He says he had to truly make up his mind and now he has. Stay tuned to General Hospital weekdays to see how these stories play out.

Days Of Our Lives Spoilers: Cheating And Break-Ups Lead To Nicole And E.J. Reunion