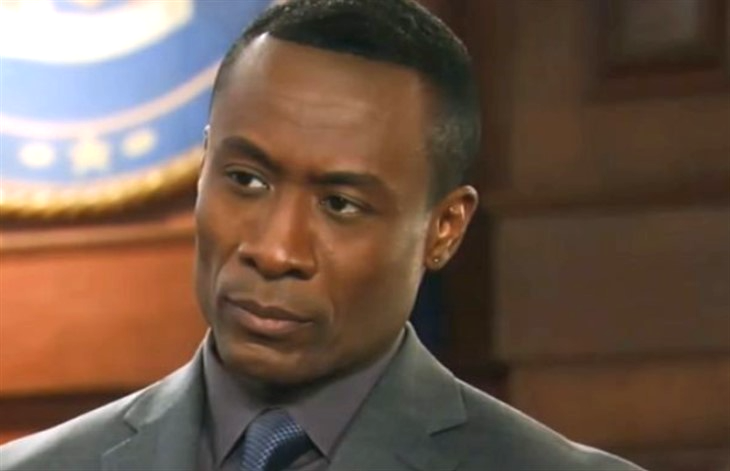 General Hospital (GH) spoilers for Thursday, April 22, 2021, reveal Jason having quite the reunion in a jail cell and Nina trying to keep her massive secret in Nixon Falls.

Jason (Steve Burton) wasn’t sure what Carly (Laura Wright) was plotting but she told him to be patient. When he got back to his cell he found he has a new roommate and that roommate is none other than Shawn Butler (Sean Blakemore), Sonny’s OTHER enforcer.

Nobody really knows why Shawn is still in prison since authorities knew years ago that he never shot Hayden (Rebecca Budig), but Pentonville is where he lingers and now he’s there to help Jason out of a jam. When Jason asks who set this reunion up, he’s not thinking Carly. But, he should be thinking Carly.

GH Spoilers  – Nina Reeves Is In A Bind

Over in Nixon Falls, Sonny (Maurice Benard) continues to believe he is a man named Mike and Mike really likes Nina Reeves (Cynthia Watros). Too bad Jasper Jacks (Ingo Rademacher) has now arrived and Nina has to keep things cool. She seems to enjoy Sonny’s company more than Jax’s company.

Will Jax eventually run into Sonny during his little trip or does Nina make sure her secret stays safe so she can go on living her secret, peaceful life?

Maxie (Kirsten Storms) is determined to make sure Peter (Wes Ramsey) never gets his hands on their baby or even meets the little girl. As she plots with Britt (Kelly Thiebaud), she also can’t believe what she got herself into with a man everyone warned her about.

To that end, she visits Nathan’s grave once again to talk it out with the man Peter took from her. She has to tell someone what she’s up to and is looking for a sign that pretending her baby is dead is the right choice. Will Nathan give her that sign?

Or will Anna (Finola Hughes) get to her first? After all, she promised Peter she’d deliver Maxie to him in exchange for saving Chase’s (Josh Swickard) life. Of course, she also doesn’t know if she can trust him. (Note to Anna: You can’t trust him.)

Because Chase is sick, Willow (Katelyn MacMullen) still hasn’t told him that she’s decided to be with Michael (Chad Duell). On Thursday, she asks Michael if he minds waiting just a wee bit longer for Willow to tell poor Chase the truth. Tune into General Hospital weekdays to see how all these stories play out.

Royal Family News: Prince William Told Peter Phillips To Stand Between Him And Harry At Funeral