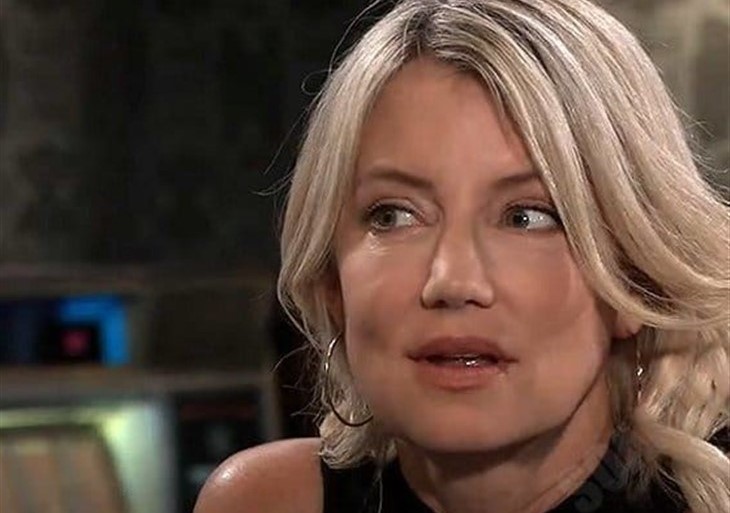 General Hospital (GH) spoilers say that if there’s anything we’ve learned about life in this fictional town of Port Charles, it’s that no secret can be kept for too long. While both Maxie Jones (Kirsten Storms) and Brook Lynn Quartermaine (Amanda Setton) have been trying to keep their baby switch plot on the down low, Nina Reeves (Cynthia Watros) will soon learn the truth about Maxie’s baby. Read on for all of the latest spoilers.

According to the latest edition of Soap Opera Digest, Maxie goes to her former sister-in-law to seek advice on her current situation, and that’s when she lets her in on the truth. Cynthia Watros, who plays Nina Reeves on the hit ABC soap, says that when Maxie comes to her about her daughter being kidnapped, she feels hut and devastated, even though Maxie is only telling her half the truth.

Cynthia puts it this way, “Nina can see her pain and agony and understands her wanting to get away from it all. It’s the same thing that made Nina want to stay in Nixon Falls. She recognizes what Maxie is going through really clearly because she went through the same thing. But she points out that Maxie has a beautiful circle of people around her who love her and Nina is wondering why she would want to leave that support.”

General Hospital spoilers say that’s when the truth bubbles up to the surface. When Nina suggests that the baby stay home with her mother Brook Lynn, Maxie tries to intervene. In the heat of the moment, that’s when Maxie decides to tell Nina the truth. Understandably, that’s when Nina has questions.

GH Spoilers – What Will Nina Reeves Say Next?

Watros continues, “Once Maxie explains that it’s because of Peter and how much danger they feel like they have been in, and that Brook Lynn was never pregnant, it clicks with Nina. She gets it. She understands. And then she goes to, ‘Who else knows this? There are other players in this story. How did Brook Lynn get involved in this? And does Valentin know the truth?’”

Of course, fans will find out soon enough! General Hospital airs weekdays on the ABC network. Check your local listings for times. Are you a fan of daytime television? Be sure to catch up on everything happening with General Hospital right now. Come back here often for all the latest General Hospital spoilers, news, and updates.