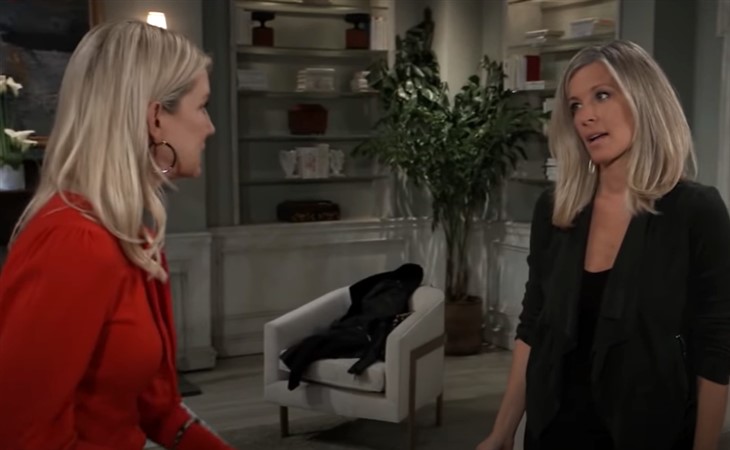 General Hospital Spoilers – Carly Corinthos Has It Out With Nina Reeves

The last thing Carly (Laura Wright) wanted was to ever see Nina (Cynthia Watros) with Wiley (Theo and Erik Olsen) again because Carly is in charge of all babies in Port Charles and whether they get to see their family or not.

But Jax (Ingo Rademacher) coerced Michael (Chad Duell) into allowing it, so Carly does her best to be cordial but is furious inside. As Carly lets Nina know how she feels in as nice a way as Carly can, will Nina feel guilty about keeping Carly’s husband from her? Perhaps, she’ll just give her a jar of spaghetti sauce as a peace offering.

After Nina leaves, Carly then has it out with Jax as well. Wiley was none of his business and he shouldn’t have gotten involved. Michael puts an end to that by telling his mother he can take care of his own life, thank you very much.

Alexis (Nancy Lee Grahn) is determined to stir up good trouble in Pentonville by finding a way to finally get Shawn (Sean Blakemore) released. This is just as Shawn is having a visit with TJ (Tahj Bellow) determined to have him drop his obsession with his case.

TJ apparently has a busy day because he and Molly (Haley Pullos) also have a reunion with Stella at the hospital after Stella (Vernee Watson) chews out Jordan (Briana Nicole Henry) for ruining her marriage.

While Willow (Katelyn MacMullen) couldn’t say no to Chase (Josh Swickard) about his marriage proposal, Brook Lynn (Amanda Setton) has a few things to say to Willow about not being honest with Chase. But Willow doesn’t know what to do because Finn (Michael Easton) seems lost.

The doctor feels so much guilt for not being able to find a cure for the man who he thinks is his son and he retreats to his lab to figure out where he went wrong once and for all. Did it ever occur to him that the DNA he used was the wrong DNA? Stay tuned to General Hospital weekdays to see how these stories play out.

Days Of Our Lives Spoilers: Brandon Barash Remembers A Very Important Person In His Life