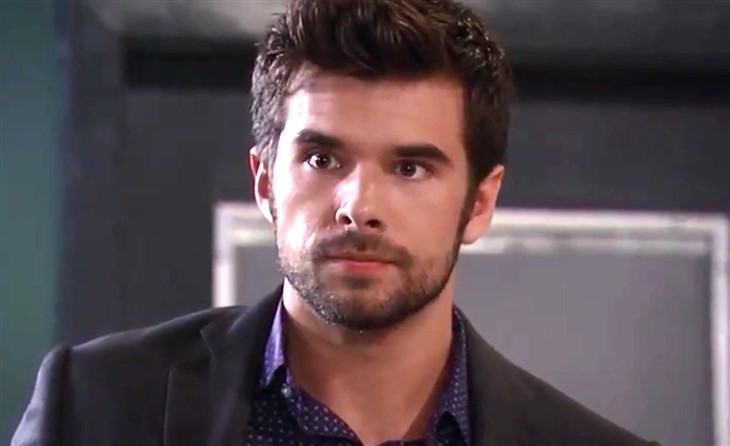 General Hospital (GH) spoilers for Monday, August 9, 2021, reveal Harrison Chase (Josh Swickard) continuing to keep the fact that he can walk a secret because one big lie deserves another, right?

Chase now knows that Willow (Katelyn MacMullen) has been lying to him for months, realizes she only married him because she thought he was dying, and now is only staying married to him out of pity because he’s in a wheelchair. Oh, and she’s also pledging her undying love for him by doing the deed with Michael (Chad Duell) behind his back. He really just wants them to come clean with him and he gave them that chance, but Michael and Willow continued to try pulling the wool over his eyes.

This makes Chase rightfully angry and he is intrigued when Willow tells him she’s made a decision. He can’t wait to hear it and is giving them another chance to come clean, but Willow can’t actually tell the truth. That would make her as pure and sweet as she claims to be.

Austin (Roger Howarth) is also now Chase’s new BFF and he runs an idea by the detective on Monday. He says it’s a long shot but that they could win big. Will this make Michael and Willow feel more pain? Meanwhile, Brook (Amanda Setton) thinks Michael’s behavior is weird and she might be right.

Alexis (Nancy Lee Grahn) and Nikolas (Marcus Coloma) are shocked to see that Ryan (Jon Lindstrom) sent a letter to Spencer (Nicholas Chavez) all the way in France that was returned to sender. That makes Nikolas suspect something odd is going on and maybe Spencer had something to do with the stalking incidents. It also makes him fear for Spencer’s life because the teen might not realize what he got himself into and with whom.

As Sam (Kelly Monaco) receives an odd message, she also decides that she and Shawn should track down Naomi and have a talk with her. Can she lead them to Hayden (Rebecca Budig) and will Hayden name Nikolas as her shooter? Will Sam remember that she already knew Nikolas ordered the hit? Will Naomi even agree to see them? Stay tuned to General Hospital weekdays to find out.