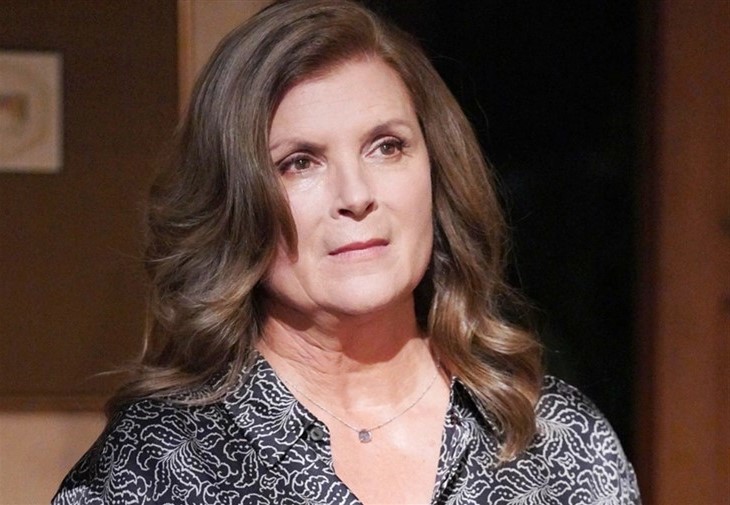 The Bold and the Beautiful spoilers reveal that Sheila Carter (Kimberlin Brown) has been secretly watching her son from afar for many years. All of a sudden, she decides to come out of the shadows and meet John “Finn” Finnegan (Tanner Novlan). Why does she decide to approach Finn on his wedding day? Brown explained Sheila’s state of mind in an interview.

The Bold And The Beautiful Spoilers – Watching From Afar For Years

B&B spoilers reveal that Brown told Soap Opera Digest that Sheila has been watching her son from afar for many years. There seems to be a reason for this other than just a mother’s curiosity. The actress teased that fans will find out the circumstances as to why Sheila has been keeping an eye on Finn.

Novlan teased last week that Finn loves Li Finnegan (Naomi Matsuda) and Jack Finnegan (Ted King). He considers them to be his parents and they gave him a great childhood. However, Finn still has that void inside of him wanting to have a genetic link to others.

In this week’s issue of the magazine, Brown stated that only Sheila would choose her son’s wedding day as the ideal time to come forward. She also said that Finn needs to know who Sheila is. She doesn’t crash the wedding, but sneaks up on Finn when he’s alone during the reception.

The Bold And The Beautiful Spoilers – Truly Loves John Finnegan

The Bold and the Beautiful spoilers reveal that Brown says Sheila truly loves her son. However, she is also aware that she might not be allowed to have a relationship with him. As for how she feels about the wedding, Sheila is absolutely thrilled. She is also aware that Finn and Steffy Forrester (Jacqueline MacInnes Wood) have a baby together, which means Sheila is a grandma.

She tells him who she is and Finn is so excited. He just assumes that everyone is going to be as excited as he is to meet his mom. Of course, fans need to remember that Finn doesn’t know Sheila’s history. Once he does, he still thinks about how people can change. This will become a big conflict for “SINN.”

Brown added that she thinks that Sheila has changed for the better. However, she admitted thinking the same thing last time. So, we will have to see what the future holds for Sheila, Finn and the Forresters. What are your predictions for this storyline and how will Sheila’s arrival affect “SINN?” Keep watching the CBS soap to find out what happens next.

Be sure to catch up on everything happening with B&B right now. Come back often for the Bold and the Beautiful spoilers, news and updates.