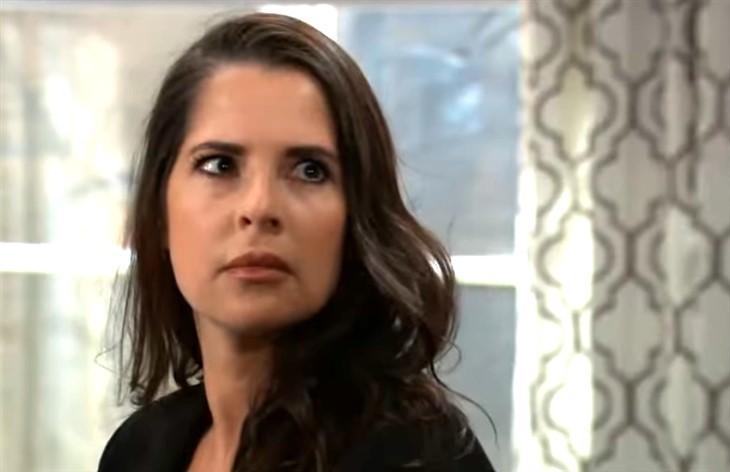 General Hospital (GH) spoilers for Monday, August 16, 2021, reveal Sam goes on a date with Dante as her past comes back to haunt her in a very real way.

Sam (Kelly Monaco) and Dante (Dominic Zamprogna) are on an actual date at the Metro Court pool, which is the most happening place in Port Charles as of late. They bonded at the hospital over tales of sons with video games issues and decided they definitely needed to bond some more in a much more enjoyable place.

And they certainly are enjoying one another when Dante gets up to get her a drink. As soon as Sam is alone on a lounge chair her phone rings and a very familiar voice is on the other end calling her name. And that voice sounds just like ex-husband Drew Cain — or at least the voice of the new Drew Cain, as he is very much alive and played by Cameron Mathison of All My Children fame.

Spencer (Nicholas Chavez) has no idea his father is on to him and plans to make his little party at Wyndemere into a chaotic one, revealing his misdeeds to all his friends. In his ignorant bliss, Spencer tells Trina (Sydney Mikayla) he has a few more tricks up his sleeve but he has no idea the tricks Nikolas (Marcus Coloma) has planned.

He also has no clue that Ava (Maura West) is trying to check out Nikolas’s theory and goes to Kevin (Jon Lindstrom) for some psychological advice, especially since the theory involves Ryan Chamberlain.

Laura (Genie Francis) should be concerned about all of this as it affects her wayward grandson and her not-always-honest son, as well as her husband. Instead, she is at the hospital checking on Elizabeth (Rebecca Herbst), who tells her she doesn’t know how to process something. Is it her own grief over losing her husband this year or is she concerned that Hayden’s (Rebecca Budig) mother was murdered?

Carly (Laura Wright) needed to stop feeling guilty for rushing into marriage with Jason (Steve Burton) so she conjured up Sonny (Maurice Benard) in her mind to tell her it was all just fine. Now that she gave herself permission and told herself it was really Sonny who gave it, Carly has to deal with Jax (Ingo Rademacher) and he is not very happy.

Jax does not like the idea of her marrying Jason at all and knows they are both putting Josslyn (Eden McCoy) in more danger every day. As any concerned father should, he demands Carly tell him what steps she is taking to ensure that their daughter remains safe. Stay tuned to General Hospital weekdays to see how these stories play out.

B&B Spoilers: Carter Has Big News For Quinn – Finn Has A Secret