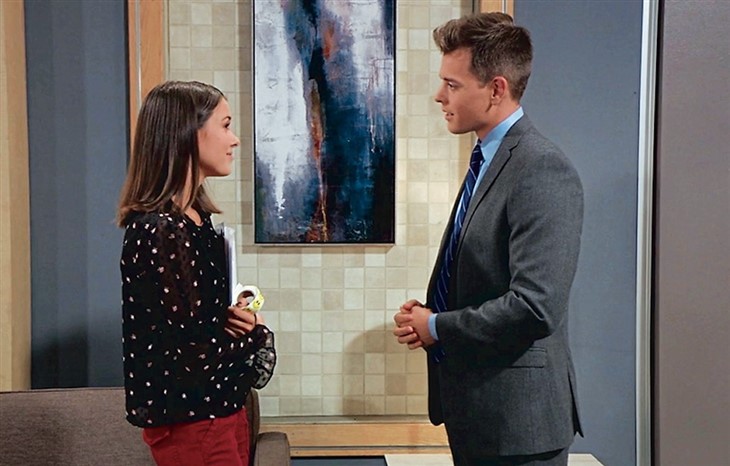 General Hospital (GH) spoilers tease that Michael Corinthos (Chad Duell) and Willow Tait Chase (Katelyn MacMullen) will nearly be busted in an upcoming episode of General Hospital! It turns out that little mouths have big ears!

General Hospital Spoilers – Wiley Corinthos Has Quite The Vocabulary Now

General Hospital viewers will have noticed that Wiley Corinthos (Erik and Theodore Olson) has quite the vocabulary now. Wiley was the one that got Nina Reeves (Cynthia Watros) in trouble when she confused him by telling him that Willow wasn’t his real mother. However, that has been a few months ago and General Hospital viewers will recall that he has quite a larger vocabulary now. As a matter of fact, he’s a regular little chatterbox! In a recent episode of General Hospital when Nina was visiting with him, as she and Willow were trying to have a conversation he was talking about one of his toys having a broken red thing! Wiley was playing with toy cars on the coffee table, and to know a part of one that was red in color and broken shows he has quite a bit of understanding and vocabulary now.

Little children repeat a lot of what they hear and see the adults in their lives doing, some of that is merely part of their learning process as they mature. Willow, having been an elementary school teacher, would understand that. Some General Hospital viewers may remember the old song, “I Saw Mommy Kissing Santa Claus”. Well, since that song was popular in the 1950s, technology has evolved a lot. As smart as Wiley is and having mechanical aptitude as well, witnessed by his knowing part of his toy car was broken, he may hear and possibly see a lot more than Willow and Michael might think he does – especially if they have a two way baby monitor! Even more so if it has a camera! Wiley might turn the two way function on and have full view and sound of whatever happens to be going on in earshot and view of the other monitor!

General Hospital viewers know that Michael and Willow’s relationship has become very complicated! Now that Harrison Chase (Josh Swickard) is on the road to recovery, Willow still hasn’t told him the truth. General Hospital viewers have to admit that she should have told him sooner – but now he is making her his reason to push for his recovery, and pushing so hard to regain his total mobility. It is difficult for Willow and Michael to get any time together at all, unless it has something to do with co-parenting Wiley, since Chase is living in the gatehouse now with Willow and Wiley! However, he is not always there – sometimes he is getting his physical therapy sessions and Willow is not always with him there.

He wasn’t there when Nina visited this last time. So Willow and Michael would have to meet when Chase is not in the gatehouse and possibly while Wiley is down for a nap or asleep – or so they think! Willow and Michael have been busted before – by Jasper “Jax” Jacks (Ingo Rademacher) who saw them making love on the couch in front of an open window! That is how he leveraged Nina time with Wiley! Michael and Willow may not take that chance again but they certainly may talk about what is happening with Chase and try to figure a way for them to spend time together and talk about intimate and personal things. It is probably going to be these intimate and personal things that Wiley hears and possibly sees them kissing, and he could easily come out of his bedroom and ask if Daddy is moving back in! Then they will realize they need to take more caution!

The Young And The Restless (Y&R) Spoilers: Should Abby Be Suspicious Of Stitch?