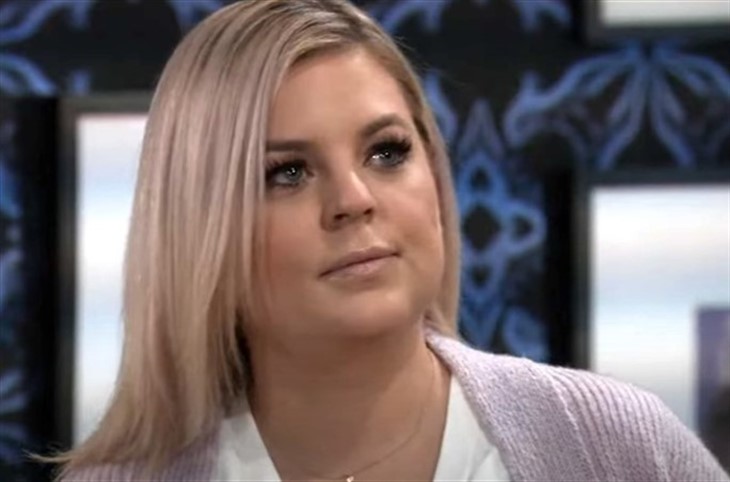 GH spoilers reveal that Brook Lynn Quartermaine (Amanda Setton) proposed a deal with Maxie. They both have situations that make them desperate for a solution. Brook Lynn is faking a pregnancy and will need a baby to get the ELQ shares from Valentin Cassadine (James Patrick Stuart). Meanwhile, Maxie is determined to keep Peter away from her baby.

Even though the two seem to come up with a plan, it is doomed to fail. Speaking to Soap Opera Digest, co-head writers Chris Van Etten and Dan O’Connor teased what is next for this May Sweeps storyline. Brook Lynn will be thwarted, Maxie will be deceived, and Peter actually has a plan of his own.

Over in Nixon Falls, Nina and Sonny Corinthos aka “Mike” (Maurice Benard) get closer. However, Nina ends up on a date with Elijah Crowe (Dan White), which seems to ignite Sonny’s jealousy. Meanwhile, expect Nina to contemplate making a huge life change. While she already had one close call from Port Charles, which was Jasper “Jax” Jacks (Ingo Rademacher), more surprises are coming. Nina’s two lives will continue to collide. So, who else from Port Charles will come to Nixon Falls, and what will happen when the truth about Sonny is revealed/

General Hospital spoilers for May Sweeps reveal that the situation with Cyrus is exploding to new levels. Laura has enough and works with the Port Charles Police Department in order to take Cyrus down. Expect Laura to exploit Cyrus’ weaknesses, but there could be more explosive plots before the villain is neutralized.

GH Spoilers – For May Sweeps

As for what else to expect, Michael Corinthos (Chad Duell) and Willow Tait (Katelyn Macmullen) put the brakes on their relationship. It’s just until Harrison Chase (Josh Swickard) recovers from his poisoning. However, it is teased that this love triangle will go on for an extended period of time. It is suggested that Chase’s sickness might end up being long-term, or that is what someone wants certain characters to believe.

“But will Chase recover at all? That’s an open question.”

We will also see Carly having to make some difficult choices, possible romance for Anna Devane (Finola Hughes) and Alexis Davis (Nancy Lee Grahn) rediscovers who she is in prison. Roger Howarth is returning but as who remains to be seen. Plus, Sam McCall (Kelly Monaco) and Dante Falconeri (Dominic Zamprogna) will be on opposite sides of a situation. It will either bring them closer together or tear their friendship apart.

Days Of Our Lives (DOOL) Spoilers Friday, May 7: Susan Nearly Blows Her Cover