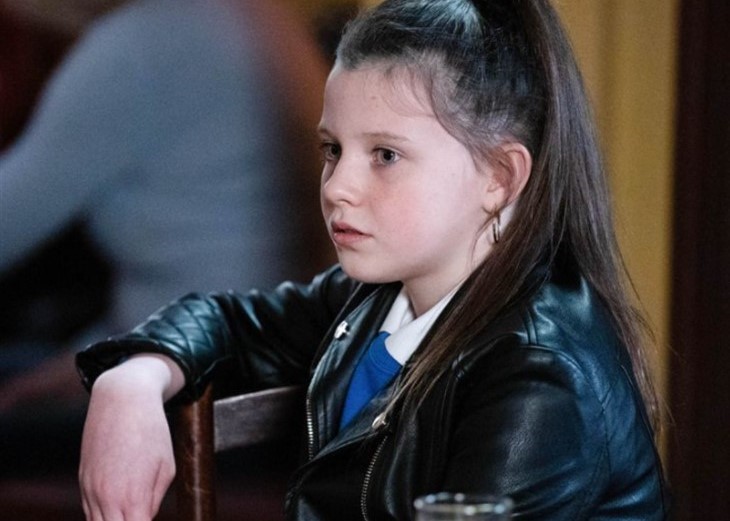 EastEnders spoilers reveal that Lily Slater (Lilia Turner) plans to run away after her mum, Stacey Slater (Lacey Turner), is sent to prison for pushing Ruby Allen (Louisa Lytton) down the stairs, which caused her miscarriage. The Slaters are going through a tough time especially for their 10-year old member, Lily, and this may be her way to cope with her mum’s absence.

Viewers know that Stacey’s ex, Martin Fowler (James Bye) is dating Ruby. To make sure that Martin won’t go back to Stacey, Ruby pretends that she’s pregnant. Later on, she found that she no longer has to continue lying because she’s expecting a child for real. Unfortunately, she gets a miscarriage and blames Stacey for it all. She wants to get revenge on Stacey and accuses her of pushing her down the stairs and that blatant lie is about to send Stacey to prison for several months.

Fans know that Stacey may spend time in jail and away from her family. Her mother, Jean Slater (Gillian Wright), notwithstanding her current health problems, will do all she can to help her family get through this. She already has her hands full as they await Stacey’s sentencing and Lily’s constant questioning is not making things better. The child wants to know why they’re not doing more to help her mum.

Lily Allen Gets An Idea At Will Mitchelle’s Party

In an effort to cheer Lilly up, Will Mitchell (Freddie Phillips) invites her to his sister’s, Janet Mitchell (Grace), party. He also reveals that he knows her mum is going to prison. At the party, Will brings up his mom’s, Honey Mitchell (Emma Barton), recent injury and how it helped unite their family. Will’s story gives Lily the idea that she can do something to bring her family together again.

At home, Lily overhears her family discussing Stacey’s hearing. She then sets her plan in motion and throws herself down the stairs, unconscious. Stacey gets terrified and immediately calls for help. Scenes from upcoming episodes reveal that Lilly will be okay after the fall.

Meanwhile, Martin will tell Ruby about his worries concerning the kids. But the latter will be unfazed and continue her lies. Martin assures his ex-partner Stacey, that he’ll take care of Jean and Lily while she’s away.

After Stacey’s sad exit, Lily will once again begin her schemes. She’ll ask Jean to get some supplies for a fake afternoon tea party. While her grandmother is out, Lily packs her things quickly.

Is she planning to leave town? Where will she go? Will Jean get back home in time to stop Lily from leaving?