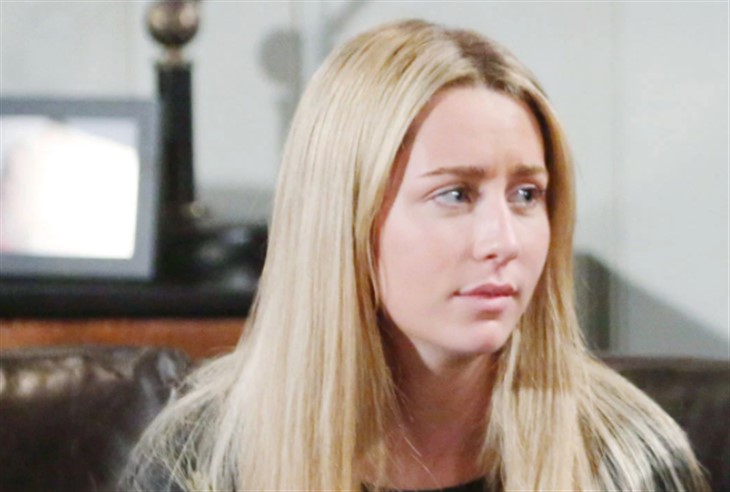 General Hospital (GH) spoilers tease that Josslyn Jacks (Eden McCoy) will check in on a devastated Cameron Webber (William Lipton) in an upcoming episode of General Hospital. It looks like something will happen to Franco Baldwin (Roger Howarth) and Joss will be there to comfort her friend.

General Hospital viewers will remember that Cameron wanted to protect Franco, and his family. He was devastated when he found out that Franco’s brain tumor came back, and it could be fatal. Dr. Lucas Jones (Matt Trudeau) had been able to remove part, but not all of it after Franco had a head injury when the Floating Rib blew up. Since then, more and more of Drew Cain’s (Billy Miller) memories have been coming up, but Franco’s brain tumor has not shrunk with the radiation treatments he has been receiving. However, his hair has been falling out and Cameron had Josslyn and Trina Robinson (Sydney Mikayla) shave his head to show his support for Franco.

Then, one day shortly after, Franco had been sleeping on the family couch and having a nightmare with memories of Drew’s when Peter August (Wes Ramsey) apparently was introducing him to Helena Cassadine (Constance Towers) and also talking about Jason. He kept calling out Jason’s name in his sleep, and Cameron had tried to wake him up – Franco had woken up and tried to strangle him! Cameron wasn’t hurt, and he wasn’t afraid, and tried to convince Franco it was a nightmare and he shouldn’t have tried to wake him up. He knew Franco wouldn’t ever hurt him intentionally! But now, after Franco moving out with the intention to commit himself for treatment at Shadybrook, something has happened to Franco and Cam is devastated!

General Hospital viewers will remember that Josslyn is no stranger to grief – her first love, Drew’s son Oscar Nero (Garren Lake Stitt) died, also from an inoperable brain tumor. She was reading to him at the beginning of the night, and she fell asleep only to wake up and find out he had died overnight. She was just as devastated as Cameron is now, and her grief is compounded by the recent deaths of their high school English teacher Dustin Phillips (Mark Lawson) and “brother” Dev Cerci (Ashton Arbab) who died from their injuries in the explosion of the Floating Rib. Undoubtedly, those deaths are also compounding Cameron’s grief as well. Josslyn hears about the tragedy with Franco and comes to check in on Cameron as quickly as she can. She finds him devastated and blaming himself for not talking Franco out of moving out of the Baldwin home.

If only he had been there and not decided to move out and commit himself to Shadybrook, he wouldn’t be gone now. Josslyn talks to him about how she once had blamed herself for letting Oscar die alone, but of course he wasn’t – he knew she was there even if she had fallen asleep reading to him. Oscar wouldn’t have wanted her to watch him die, and Franco would feel the same way. If he was going to die from his brain tumor, he sure wouldn’t want his wife and family to watch him do it! Cameron is inconsolable, but Joss hopes she at least has been of some help convincing Cameron not to blame himself!