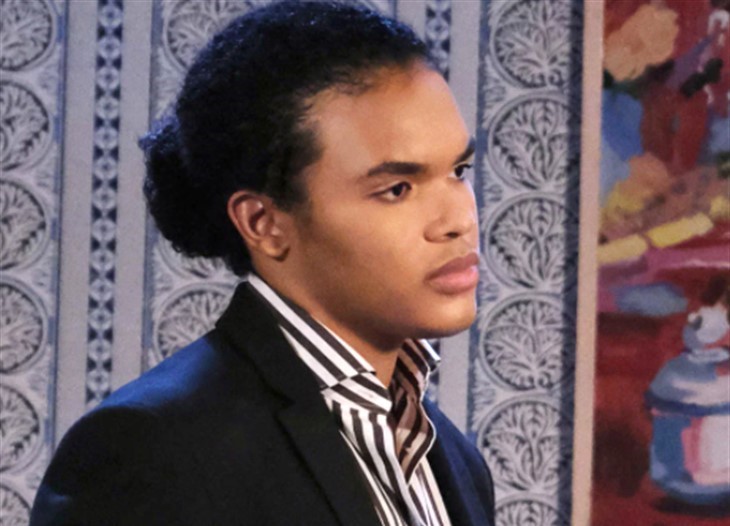 Days of Our Lives (DOOL) spoilers for the week of March 15 reveal that Theo Carver (Cameron Johnson) and Claire Brady (Isabel Durant) will reconnect. The last time Theo was in Salem, Claire tried to kiss him. He had to tell her that he was seeing someone back in Africa. But some time has passed since then. With Claire single, could Theo be interested in rekindling the romance?

DOOL spoilers reveal that Theo is coming back to Salem. There are no details on if it’s just for a few episodes or if it’s a more permanent stay. What we do know is that he will still be in town during the week of March 15. When Claire saw her ex-boyfriend after her released from Bayview, some old feelings lingered. She got ahead of herself and misinterpreted signals. This led to her trying to kiss him. However, he stopped her and had to tell her to come back down to reality. Then he explained that he had a girlfriend in Africa.

When Theo returns, he will hear all about Claire’s relationship with Charlie Dale (Mike Manning). Theo will probably feel guilty because he was the one who pushed Claire to give Charlie a chance. If he had any idea that the Titan intern was a monster, he would never have encouraged Claire to walk right into danger.

Days of Our Lives spoilers reveal that Theo and Claire will reconnect. The last time they saw each other, they bonded over Ciara Brady Weston’s (Victoria Konefal) death. Claire, Ciara, and Theo were all pretty close growing up. They also had a love triangle at one point, but were devastated when Ciara “died.” When she is found alive, it will be something that Theo and Claire can celebrate and possibly bond over.

It’s hard to say what will happen with Theo since we don’t know if his return is short-term or if he’ll be sticking around awhile. There does need to be a few more 20-somethings in Salem. It’s no wonder Claire ended up with a monster like Charlie… because there was literally nobody else! Since Claire is single, maybe Theo will be single too, and they can talk about rekindling their romance. Sure, they had their problems and Claire nearly set their friends on fire. But that was before Claire got psychiatric help. She’s a much different person now, so it might actually work out.

Of course, there is also the possibility that Theo might find a love connection with Paulina Price’s (Jackée Harry) daughter. Chanel Price (Precious Way) is going to make her debut in the near future. When that happens, we will be able to see if there is chemistry between them. Of course, with soaps, love triangles are another possibility. We will have to keep watching the NBC soap to find out what happens with Theo, Claire, and Chanel.