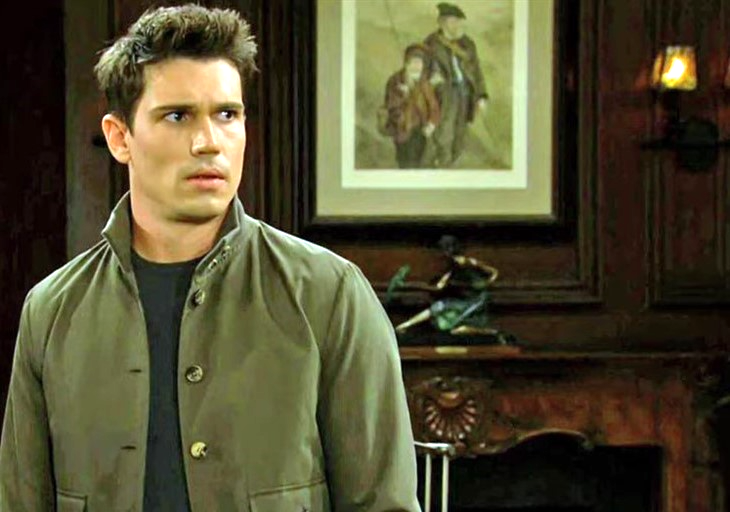 B&B fans witnessed a series of stunners, with Vinny’s job at the hospital lab and direct handling of Steffy Forrester’s (Jacqueline MacInnes Wood) paternity test results being exposed. Using the excuse that he wanted to help Thomas, Vinny strongly appears to have intentionally made Liam Spencer (Scott Clifton) look like he’s the father of Steffy’s baby as a way to also hurt Novlan’s character.

The revealed, internal conflict was telegraphed when a profile shot of LoCicero’s character led a scene in the hospital laboratory.

Some, or even many, in the audience may have not recognized Vinny from that first-glimpse. He was looking into a microscope as Finn entered the lab. Vinny turned around as both Finn and the full audience confirmed who it was. Then, something else interesting happened.

Finn and Vinny talked about how they met at Steffy’s in the recent past, which referenced a scene that the audience never saw. That information also connects to when Thomas wondered aloud if his longtime friend had a crush on his sister. He did that when giving Steffy the Teddy Bear gift box Vinny forwarded that included an illegal pain pill bottle.

An interesting reveal within this developing storyline has Vinny telling Thomas that he doesn’t like Finn, who he barely knows. Vinny’s jealously was built through the comments of female hospital staff members expressing their appreciation for Finn’s looks.

Vinny feels sorry for himself and has decided that various other people in the world aren’t deserving of success. He sees life as a random chance event, while knowing with certainty that others haven’t earned what they have. The contempt that he has for Finn is steeped in his own insecurities.

So, choosing to blame Finn for his supposed hard life, Vinny seemingly decided to deny the man his first-born child by committing a crime in their shared workplace. Of course, one could reasonably assume that wasn’t Vinny’s first workplace offense, as he seems to be stealing medication and then selling it as part of what he falsely labels a side-hustle.

The Bold And The Beautiful Spoilers And Rumors: Vinny Walker Panics – Finn Busts Him Stealing Drugs?https://t.co/WQTzOiJvxE

The Bold And The Beautiful Spoilers – Admitting The Terrible Truth

It appears as though Thomas will eventually force Vinny to admit what he did, or that information will be obtained in some other manner. Finn is sure to explode when he learns the truth in any regard.

Thomas told Vinny that he won’t ever forgive him if he is lying. Vinny looks guilty while he tries to further what appears to be a falsehood.

When this terrible truth comes out all involved characters will face life-altering consequences.