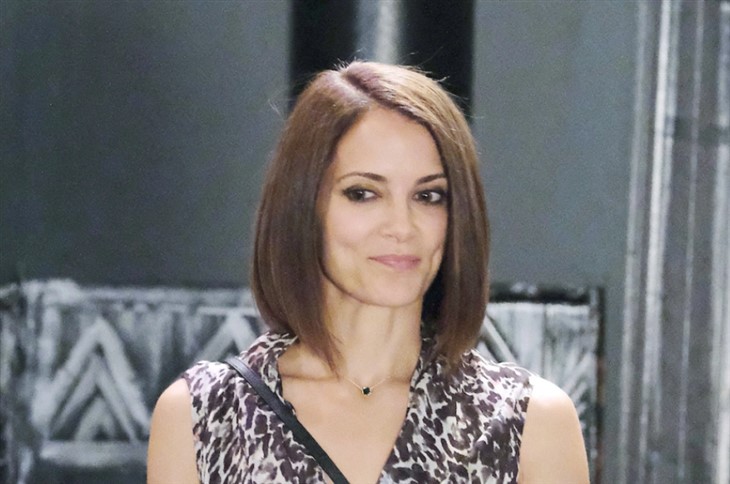 General Hospital (GH) spoilers tease that if there was ever a good time for Hayden Barnes (Rebecca Budig) to return to Port Charles, it would be in the next few weeks. As viewers may remember, when Hayden disappeared a couple of years ago, she was still married to Nikolas Cassadine (Marcus Coloma). Nikolas had promised her a percentage of the Cassadine empire for Hayden’s help in obtaining the Codicil that would restore Nikolas as the rightful Cassadine heir and remove Valentin Cassadine (James Patrick Stuart). Valentin knew that Hayden was up to something and threatened her. So Nikolas supposedly convinced Hayden to go into hiding, although now he claims he has no idea where she went.

General Hospital Spoilers – Hayden Barnes Won’t Stay Away From Violet Barnes And Longer Than Need Be.

Hayden had just told Dr. Hamilton Finn (Michael Easton) about the daughter they share, Violet Barnes (Jophielle Love) when Hayden had to leave. Finn and Violet eventually formed a close bond, but there is no doubt that she still misses her mother. And for her part, if there were any way at all for her to come home, Hayden would certainly take it. She won’t want to be apart from Violet any longer than necessary. Perhaps she is a hostage of someone else, much like Holly Sutton (Emma Samms) is. If that’s the case, Hayden will certainly find a means to escape and will reunite with Violet immediately!

Over the last few weeks, Finn has been getting closer with Elizabeth Webber (Rebecca Herbst). Elizabeth is just recently widowed and Finn is still getting over his breakup with Anna DeVane (Finola Hughes). And as the two of them continue to work together to save Harrison Chase (Josh Swickard), they might come to realize that they are attracted to each other. Could they perhaps act on those feelings just as Hayden is coming back?

General Hospital Spoilers – Hayden Barnes May Decide To help Shawn Butler Get Out Of Prison!

Shawn Butler (Sean Blakemore) was tried and convicted of trying to kill Hayden. But the truth is that Nikolas was responsible for his wife’s shooting and let Shawn take the fall. And while it’s true that she was allied with Nikolas when she disappeared, if he was behind her disappearance she won’t likely feel loyalty. She might try to use their marriage to get a hefty divorce or annulment settlement or if Nikolas won’t play ball, she may go directly to Shawn and tell him exactly who is responsible for the crime he is doing time for as her way of getting revenge.

Is now the right time for Hayden to come back? How will she feel about Finn and Elizabeth’s growing bond? And what will she have to say to Nikolas, who has yet to compensate her and may very well have been keeping her hostage? Will she turn to Shawn and help him get out of jail? Could Nikolas see jail time for Hayden’s shooting? Just when life begins to go on, the past seems to resurface in Port Charles, so stay tuned to General Hospital airs weekdays on ABC. And don’t forget to check back right here regularly for all your General Hospital news, information, and spoilers!

The Young And The Restless (Y&R) Spoilers: Victoria Grows Closer To Ashland