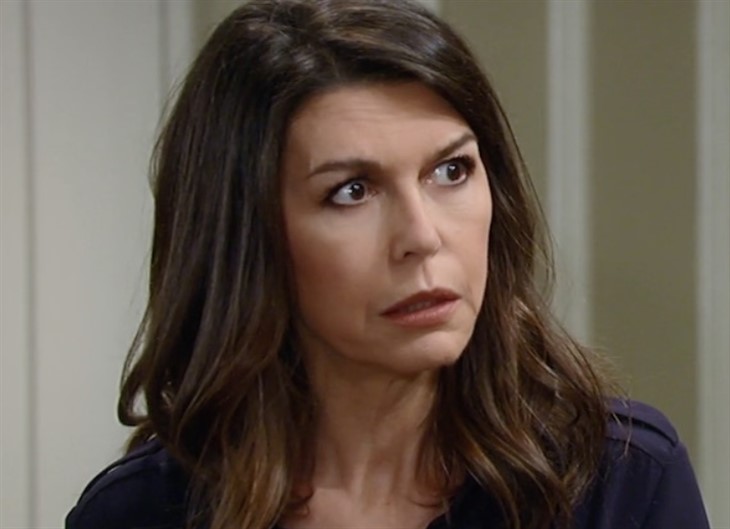 General Hospital (GH) spoilers for Friday, July 16, 2021, reveal in Port Charles, NY Sonny Corinthos and Anna Devane just one closed door away from each other. Will Anna make a shocking discovery when that door opens?

Jax (Ingo Rademacher) already saw Sonny (Maurice Benard) right after he was shot and thought he was hallucinating and Nina has been keeping ‘Mike’s’ true identity from him for months. Now, Sonny is in a New York City hospital right and so are Valentin (James Patrick Stuart) and Anna (Finola Hughes). Valentin ran into Phyllis and seems to recognize her last name, as he should if he did any real searching for Nina’s (Cynthia Watros) baby before he hired Sasha (Sofia Mattsson).

Just as Sonny is actually having some memories in a room off on his own, Anna is right outside the door, and Sonny is about to open it. While it would be perfect if someone actually found Sonny and ended this amnesia story, that’s not about to happen so soon. In the end, Anna does not see Sonny as he wonders if Lenny will truly die and Anna tells Valentin they have to find that helicopter pilot Peter (Wes Ramsey) hired.

Later, Phyllis gives Sonny a warning about Nina and the life she lived before Nixon Falls. Will he heed her warning and not get more attached?

After burning all things Jason (Steve Burton) on the Fourth of July, declaring her own Independence Day, Sam (Kelly Monaco) finally lays into Jason about marrying Carly (Laura Wright). How could he do something like that and more importantly, why?

Jason and Carly have been best friends for years and he has certainly been devoted to her, but there was never any sign he ever wanted to marry her and spend the rest of his life with her. Plus, she thought he was becoming romantically involved with Britt (Kelly Thiebaud). What gives, Jason? Will he actually tell Sam the truth? The woman who was supposed to be the love of his life for years.

The Quartermaines are still reeling over the fact that Jimmy Lee Holt’s son is now claiming his right to ELQ. While Austin (Roger Howarth) tries to make nice with Monica (Leslie Charleson), she is not happy at all. Back at home, Brook Lynn (Amanda Setton), Michae (Chad Duell)l, and Ned (Wally Kurth) team up in an attempt to protect ELQ from this long-lost heir. Stay tuned to General Hospital weekdays to see how these stories play out.

90 Day Fiancé: Does Natalie Mordovtseva Have A New Man In Her Life?